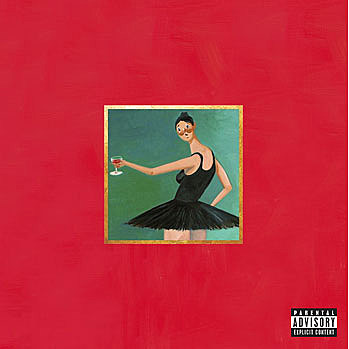 "...On Monday West, who is 33, will release his fifth album, "My Beautiful Dark Twisted Fantasy" (Roc-A-Fella/Def Jam), and it's terrific -- of course it's terrific -- a startlingly maximalist take on East Coast rap traditionalism. And yet that doesn't matter nearly as much as it should, at least partly because of West's insistence on his own greatness. By not allowing for responses to his work other than awe, the value of the work itself is diminished; it becomes an object of admiration, not of study. Instead the focus is on the whole of West's persona and character, which is more fractured and subject to a far wider range of responses. The result is that West becomes a polarizing public figure who happens to be the most artful pop musician of the day, not the other way around.

Nevertheless, West seems virtually incapable of making a bad record. He's committed to pop, and he's savvy and talented enough to make it great, every time. What's more, for him to make something other than a universally accepted smash would be a thing that his ego couldn't bear. Every Kanye West album, until the cancer of the world around him begins to encroach on the parts of his cerebral cortex that control his musical ear, will be excellent and huge. He'll never have an idiosyncratic period.

Even at his most extreme, West isn't an experimenter. His music is ornate, ostentatious, curious and vivacious. But risky? No. All of his fiddling is within recognized formulas. A producer as well as a rapper, West controls all of the major elements of his songs, unlike other artists who have to rely on their taste (or their record label's taste) in outside producers or songwriters.

To work on this album he retreated to Hawaii, as he did during the making of his previous album. And West's gravitational pull is such that he can import talent. Rick Ross, Kid Cudi, Pusha T, Nicki Minaj -- they all made the trip to make music that will appear on the album. The spooky indie folky Justin Vernon from Bon Iver spoke of smoking marijuana with Rick Ross on one of his three sojourns to Hawaii to work with West, about as surreal a tableau as has been created in the making of any pop album this year." [JON CARAMANICA, Sunday New York Times]