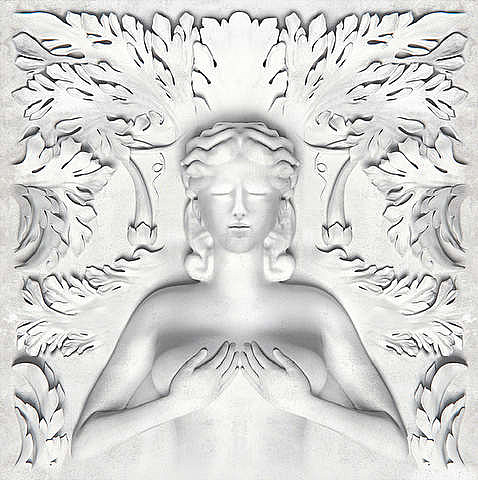 After much delay, rumors proved true and false, and some uncertain info, Kanye West's G.O.O.D. Music compilation album, Cruel Summer, is fully confirmed and will be out this Tuesday (9/18). Many of its tracks -- "Clique," "Mercy," "New God Flow," "Cold" (previously titled "Theraflu"), and his guest-filled remix of Chief Keef's "I Don't Like" -- have been floating around the internet for some time now. You can stream all of those and snippets of every album track below.

Though Kanye only actually raps on about half the album, his presence is felt throughout and Cruel Summer succeeds at playing from start to finish with an album flow, despite it technically being a compilation. It opens as huge as you expect any Kanye related release to open, addressing the album not just to his fans, friends or family, but of course, "To The World." The track brings together beat master Hudson Mohawke (who's been having a great year as one half of TNGHT) with R. Kelly and Ye. It immediately follows with the album's strongest track, "Clique," which features one of the best Jay-Z verses in recent years and a towering beat from Hit-Boy, who is also behind Cruel Summer tracks "Cold," "Higher," and of course you may know him as the guy behind "Niggas In Paris."

After it continues colossally with previously released singles "Mercy" and "New God Flow," we get the first track on the album without Kanye's voice, "The Morning." However, there's no lack of all-star rappers on the track. We get killer verses from vets Pusha T, Common, and Raekwon, and if guys like Kid Cudi and 2 Chainz are your thing, well they're there too. Cudi, though not the strongest of Kanye associates, does have a shining moment on the album though. Over a clattering beat in "Creepers," he delivers a solo vocal performance making for a rare standout personal moment from not-Kanye in the midst of Ye's encapsulating ego. That's followed by "Bliss," which sees the return of Hudson Mohawke to the boards and is the album's sole track with all singing, no rapping. A distinct contrast to the hanging out and freestyling feel of the closing "I Don't Like" remix.

Streams and tracklist are below.

DJ Khaled and Kanye West - "I Wish You Would/Cold" Video