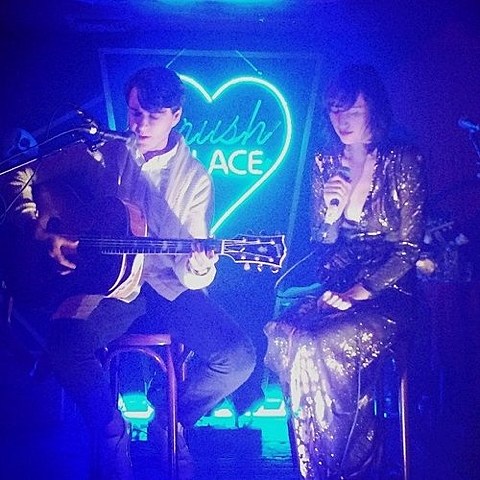 Yeah Yeah Yeahs singer Karen O kicked off her run of intimate shows (four in NYC included) this past Tuesday (9/9) at McKittrick Hotel's Manderley Bar (pics) (home of Sleep No More), and the following night's (9/10) show saw her joined by three other 2000s NYC indie greats. One was her own YYYs bandmate Nick Zinner (again), who joined for a few songs, who joined for a few songs including "Day By Go" which also included Julian Gross of Liars (who is also her designer) on tambourine. Then, during the encore, Vampire Weekend singer Ezra Koenig joined for their Her collaboration, "The Moon Song." Last night (9/11), Daniel Kessler of Interpol was in the audience, as he just tweeted from Interpol's official account.

UPDATE: This post initially said that Julian Casablancas joined Karen, but despite reports elsewhere to the contrary, Karen O's publicist tells us that it was Julian Gross of Liars and not Julian Casablancas, who joined on tambourine that night (and the following night).

Karen's run of shows wraps up tonight (9/12) at Le Poisson Rouge, which like the previous three, is sold out. Will any guests join her at this one too? After the NYC run ends, Karen continues with three nights at LA's Hollywood Forever Cemetery, two London shows and a Berlin show.

Julian Casablancas also has a new album coming out with his band The Voidz, along with a tour that Shabazz Palaces are opening. Ezra appears on the new SBTRKT album which two new songs came out from this week.