"She was talkative, funny, charming, adorable. She had a tattoo on her back that read "I Love Beards."" 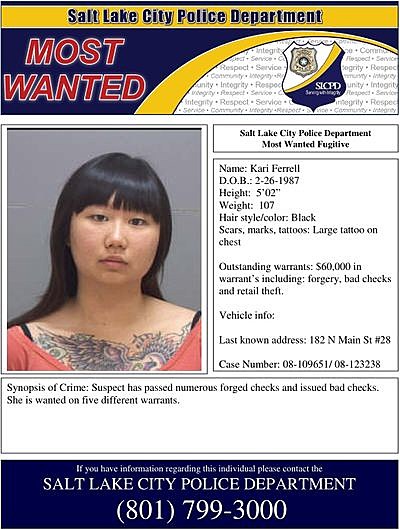 Someone sent me a link to VICE's "DEPARTMENT OF OOPSIES! - WE HIRED A GRIFTER" article the other day (above picture included). I assumed, being that it was VICE, that it was a joke. I wasn't really sure what the point was.

It wasn't until someone else sent me the link to Wednesday's Observer article that I realized this was a true story. Gawker sums it up like this:

Kari's story first came out when she lied her way into a job at Vice. That lasted a week, until someone there Googled her and found out she was wanted back in Utah for fraud, theft, and $60K in bad checks, and was generally a con artist.

But today [4/15] former Gawkerer Doree Shafrir comes out with a monstrous piece in the Observer on Kari's whole freaking life story (Doree is most comfortable when dealing with the criminal element). Oh it is delightful, assuming you weren't personally unfortunate enough to come in contact with the brash young pathological liar/ vixen! The short version: Kari stole and scammed her way around Salt Lake City for a while, then decamped to Brooklyn, where she resumed stealing and scamming, using aggressive sex appeal and wild lies like "I have cancer" or "I'm pregnant" or "I work there" (sometimes all at once, to her boyfriends!) to get...money? Validation? She's obviously mad psycho. [Gawker]

It's strange that she came to Brooklyn and used her real name. Check her out in the Salt Lake City Police's Most Wanted video below...