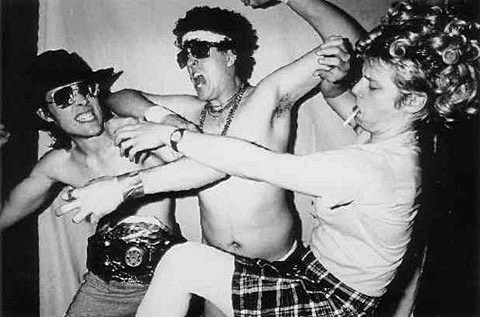 Karp was a post-hardcore band from Tumwater, Washington, that formed in 1990 and lasted until 1998. The band was formed by Chris Smith aka Chris "Slayer", Jared Warren, and Scott Jernigan. They released three full length albums entitled Mustaches Wild, Suplex, and Self Titled LP. (Note that "Self Titled LP" is a literal title. The title is not "Karp." Even the CD version of the record is titled "Self Titled LP.") They also released several EPs and 7" records. Their recordings were released by several Northwest-related labels such as K Records, Kill Rock Stars, and Punk In My Vitamins. Karp managed to mix the terror of hardcore, The Melvins, and Black Sabbath with an ear for pop-influenced song assembly. The band name is inspired from a newsletter/zine that Chris Smith put out in highschool and is an acronym that stands for "Kill All Redneck Pricks".

Members went on to play with Tight Bro's from Way Back When, The Whip, Dead Air Fresheners, and Big Business (currently playing with The Melvins). Drummer Scott Jernigan died in a boating accident on June 10, 2003.

As previously discussed, Kill All Redneck Pricks is a documentary that examines the much missed band, and debuts in NYC tomorrow, 1/6, at The Spectacle Theater (South 3rd near Bedford) with two showings (7:30 and 9:30). After the movie head to an after-party at Death By Audio featuring Vaz and Pygmy Shrews. Check out a trailer, some clips from the film, and a list of other cities the movie is playing in, below. If you can't make it, order a copy on DVD (with or without an exclusive tee) via the documentary website.

Spectacle Theater will host a bunch of music related films in the coming weeks as part of "ROCKUARY", "music-themed special events and films of all kinds- ranging from features, documentaries, shorts, remixes, live performances, and many special guests." The current slate of films include a documentary on Friends Forever, Shamans of The Blind Country (which will be scored by Diamond Terrifier), a documentary on Morrissey's impact on Latino culture (Passions Just Like Mine), Deadlock (which was scored by Can) and much much more. Head to the Spectacle site for more details.

In semi-related news, Pygmy Shrews and The Men have BOTH cancelled their 1/13 appearance at Union Pool.

All Kill All Redneck Pricks screenings and some videos are below.