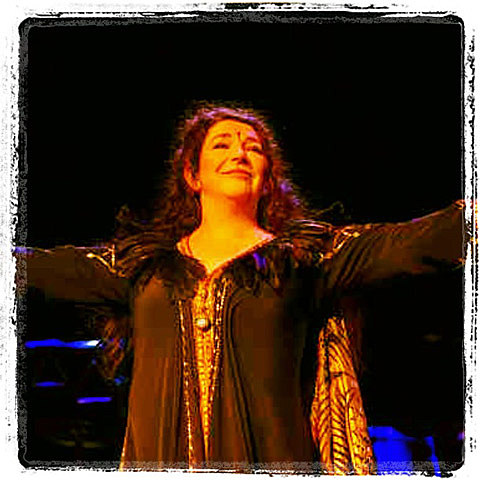 Over the course of nearly three hours, Kate Bush's first gig for 35 years variously features dancers in lifejackets attacking the stage with axes and chainsaws; a giant machine that hovers above the auditorium, belching out dry ice and shining spotlights on the audience; giant paper aeroplanes; a surprisingly lengthy rumination on sausages, vast billowing sheets manipulated to represent waves, Bush's 16-year-old son Bertie - clad as a 19th-century artist - telling a wooden mannequin to "piss off" and the singer herself being borne through the audience by dancers clad in costumes based on fish skeletons.

The concert-goer who desires a stripped down rock and roll experience, devoid of theatrical folderol, is thus advised that Before the Dawn is probably not the show for them, but it is perhaps worth noting that even before Bush takes the stage with her dancers and props, a curious sense of unreality hangs over the crowd. It's an atmosphere noticeably different that at any other concert, but then again, this is a gig unlike any other, and not merely because the very idea of Bush returning to live performance was pretty unimaginable 12 months ago.

There have been a lot of improbable returns to the stage by mythic artists over the last few years, from Led Zeppelin to Leonard Cohen, but at least the crowd who bought tickets to see them knew roughly what songs to expect. Tonight, almost uniquely in rock history, the vast majority of the audience has virtually no idea what's going to happen before it does. - [The Guardian]

Mercurial, reclusive UK singer Kate Bush just played her first live concert in 35 years at London's Eventim Apollo. The the highly theatrical, three-hour event was in three acts, opening with classics "Lily," "Hounds of Love" and "Running Up that Hill" and then the second act was the entirety of "The Ninth Wave" (aka Side 2 of Hounds of Love). The evening ended with "Among Angels" and "Cloudbusting."

The audience, which included David Gilmour, Bjork, Grace Axl Rose, Marc Almond and Lily Allen, were not allowed to take photos and The Guardian reports that people who tried had their cellphones confiscated. 21 more shows to go for the lucky few who got tickets. Setlist below...

SETLIST: Kate Bush @ Eventim Apollo 8/26/2014
Lily
Hounds of Love
Joanni
Running Up That Hill
Top of the City
King of the Mountain