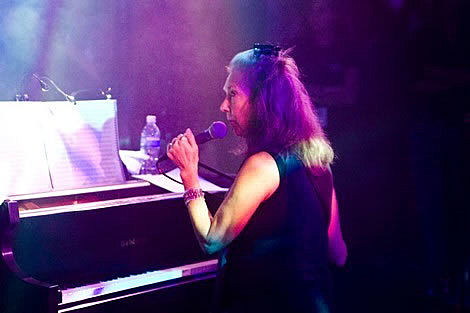 Internationally acclaimed folk singer Kate McGarrigle, best known for performing with her sister Anna, has died of cancer. She was 63.

McGarrigle's brother-in-law, Dane Lanken, said the singer died at her Montreal home Monday night surrounded by her sisters, Jane and Anna, and her children, Rufus and Martha Wainwright.

He said McGarrigle had been battling cancer since the summer of 2006. The cancer started in her small intestine and spread to her liver, he said.

Kate and Anna, known as the McGarrigle Sisters, began their careers performing at Montreal coffeehouses in the 1960s with a group called the Mountain City Four. They got their break in the 1970s, when their songs were covered by numerous artists, including Linda Ronstadt, who used "Heart Like a Wheel" as the title song to one of her albums.

In 1975 they made their first record, "Kate and Anna McGarrigle," which brought them critical acclaim and additional famous covers by artists including Emmylou Harris, Judy Collins and Billy Bragg. [Canadian Press]

So sad. Rest in peace Kate.

Rufus cancelled an upcoming tour due to an illness in the family a few days ago. Those overseas dates are below.

Kate recently performed with the whole family at the "A Not So Silent Night" show (the annual Wainwright/McGarrigle Christmas celebration) at Royal Albert Hall in the UK on December 9th. Videos from that show, and many others, below...

Kate and Anna McGarrigle: Heart Like a Wheel (Caffe Lena, 1990)