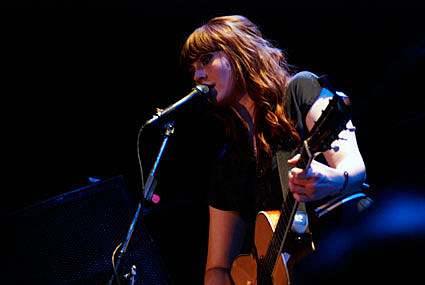 Nash seems nervous, as you might if you were roadtesting an edgier new direction in front of a crowd close enough to smell your fear. But her breathlessness adds a certain resonance to songs about inadequacy and self-loathing. Some of her new material - particularly the sparkly "Do Wah Doo" - sound as if she's been inspired by Motown girl groups, others are more baffling. "I Love You More" finds her shrieking over walls of feedback. "I Know a Secret" is an unlikely but successful psychedelic odyssey about homophobia. "I Hate Seagulls" finds an unfortunate illustration when a young girl takes the "I hate being sick" line literally and vomits in front of the stage, which one hopes is not an allergic reaction to some of Nash's voyages away from her trademark narratives into proper, if slightly karaokeish, singing. [Guardian UK]

The above review is from a March 7th show Kate Nash did in Leeds. Her new record, My Best Friend Is You, comes out April 20th, and she'll be coming to North America this spring for a tour opened by NYC's own Supercute! (an all-girl ukulele, piano trio & guitar that features Rachel Trachtenburg). The trip includes Bowery Ballroom on April 29th and Music Hall of Williamsburg on May 1st (Tickets go on sale at noon). She'll also supposedly be on some dates of the Lilith Fair this summer

The video for the album's first single "Do Wah Doo", the album's tracklist & all currently known tour dates are below...