Hot or Not? (and I don't mean her looks) 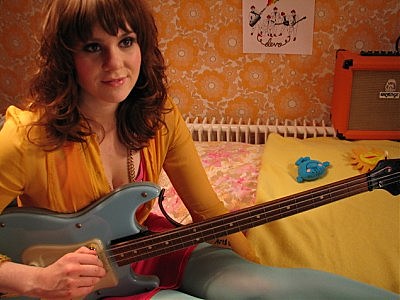 Let's just get this out of the way: Kate Nash thinks "Lily Allen Comparisons Are 'Annoying'"

Although she admitted it was "great" to have Allen's support, she admitted that the comparisons "can get annoying."

She added: "I think its lazy journalism and also quite sexist that there's not enough room for more than one female singer songwriter from London.

When my album is released though people will have more to go by and iI can hopefully be recognised more as an artist within my own right." [Pop Music Room]

Tickets go on sale Wednesday at noon for a September 25th Kate Nash show at Joe's Pub. And according to Billboard, she is also playing the following night at Luna Lounge in Brooklyn.

Having recently hit No. 2 on the U.K. singles chart with "Foundations," newcomer Kate Nash will release a digital EP named after and featuring that track on Sept. 4 via Geffen. The release also includes "Caroline's a Victim," the B-sides "Navy Taxi" and "Habanera" and a video for "Foundations."

Nash's debut album, "Made of Bricks," debuted at No. 1 on the U.K. chart earlier this month. The set will be released early next year in North America.