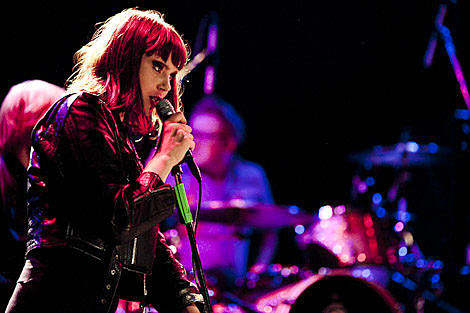 ""People have said I'm too fat to be a pop star. But this whole size zero debate is such crap, I've ended up going the other way. I come from a big Irish family who force-fed me as a kid, so not eating was never an option. I did think that being in my position I'd be paranoid about my body, but I'm also aware that girls are looking to me to make them feel secure so I try to promote a healthy approach to food." [Kate Nash to the Guardian]

Kate Nash returns to America this fall for a trip that starts in California and end ends at the Wellmont Thater in Montclair, NJ on November 20th. That show goes on sale Friday at noon. The show happening one night earlier at Terminal 5 goes on sale at that time too, but is on AmEx presale now.

Kate will be touring in support of her latest Bernard Butler-produced album, My Best Friend Is You. All dates and a video below...