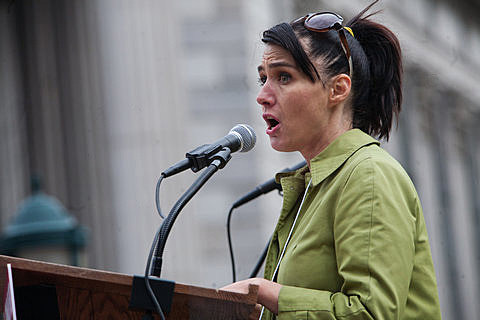 Feminist artist and filmmaker Lynn Hershman-Leeson's documentary !Women Art Revolution made its theatrical debut at Manhattan's IFC Center on June 1. The film is still screening every day at 4:25 PM through June 16. The film features a score by Carrie Brownstein (Sleater-Kinney, Wild Flag), an appearance by Yoko Ono and much more. Get your tickets for the remaining days (and go see Wild Flag at Williamsburg Waterfront).

The movie is one example of how "the Riot Grrrl movement still inspires", as NY Times puts it. The article talks about the Kathleen Hanna tribute show that took place at Knitting Factory this past December and discusses the effect the movement has had on today's indie rock scene. Amanda Warner of MNDR said, "I remember it being weird if you saw a girl in a band, and now it's not weird at all, it's just totally normal."

That Knitting Factory show in December not only served as a tribute to Kathleen Hanna, but also the debut of her new band The Julie Ruin. The project formed as a revival of her late '90s solo project Julie Ruin, the moniker under which she recorded one album of the same name in 1998. The new band also features Bikini Kill bandmate Kathi Wilcox and Kenny Mellman, Justin Bond's sidekick in Kiki and Herb. They are currently working on a debut full length. Details on the album are limited but Kathleen posted pictures from an overdub and mixing session for the album back in May. 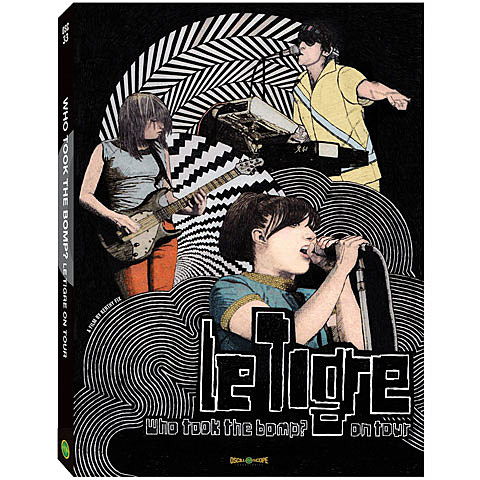 A Le Tigre documentary titled Who Took the Bomp? Le Tigre on Tour (pictured above) chronicles the band's 2004 tour and is out now. You can purchase it on Amazon. Last week there was a screening at at Maysles Institute in Harlem which was accompanied by a Q&A with director Kerthy Fix and Le Tigre member Johanna Fateman. Joly was there and taped all 45 minutes of it. If you missed it, check out the Punkcast video below. AND, they do it again on June 26th at the Ace Hotel, complete with Johanna Fateman, Kerthy Fix, AND Kathleen Hanna for the Q&A. All screening dates are listed below.

Kathleen Hanna recently spoke to Spinner, to promote the movie and stuff, and they asked her about Odd Future:

Spinner: Have you been paying attention to the controversy with Odd Future and their homophobic, misogynistic lyrics?

Kathleen: No, not really. They don't seem that interesting to me.

Spinner: Sara Quin just spoke out against them and it created a bit of a media storm.

Kathleen: I feel like, if you don't want to listen to them, don't listen to them. If you do want to listen to them, do listen to them. I couldn't really comment about on exactly what their lyrics are about, because I haven't gotten that deep into it. But if people are writing lyrics that piss you off, hurt your feelings and make you feel like s---, don't listen to it. I don't think the best idea is to have a boycott. Just don't talk about them and they'll go away. The more you talk about them, the more attention they get. Tegan and Sara fans probably wouldn't even know this band existed if they weren't talking about them. I find the whole conversation kind of boring. There are so many great artists that are doing interesting things, that I don't want to focus on boring people.

CNN also recently spoke to Kathleen who discussed Katy Perry in that one.

Ironically (sort of, maybe), Odd Future recently complained that Australians were racist. Australians say no they are not.

Odd Future's lesbian member Syd tha Kyd, who famously responded to criticism that she associates with a sexist group by saying, "That's what I do. I slap bitches", is DJing at PS1 'Warm Up' on July 23. Gang Gang Dance also DJ and Laurel Halo, Miracles Club, and Lunice play live sets on the same date. No word on if any other members of Odd Future will be in town at the time.

Film trailers, dates and a mash-up of Tyler, the Creator's "Yonkers" and Tegan & Sara's "Call It Off" by The Jane Doze, below...

Who Took the Bomp? Le Tigre on Tour - "Deceptacon" (clip)