Kathleen Hanna with Bikini Kill in the 90s 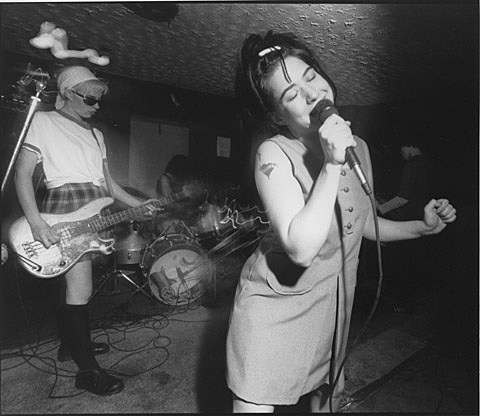 Kathleen Hannah will be celebrated on December 11th at Knitting Factory in Brooklyn, as a host of bands she has influenced will team up to perform songs from across her career. The show is a benefit for a forthcoming documentary on the Bikini Kill/Le Tigre member:

Kathleen is currently the subject of a documentary tentatively titled The Kathleen Hanna Project, a.k.a. Who Told You Christmas Wasn't Cool?, directed by Sister Spit alumni, Sini Anderson. ...The documentary explores exactly what makes people react so strongly to Kathleen Hanna's work... her personal motives and perspective on the scene she's been a part of for 20 years, "there's also a lot of context: the history, the musicians, the other people who were part of that movement." The film is also about perseverance in the face of personal attacks, even from those within one's own marginalized community. "Kathleen took an enormous amount of shit. She ate a lot of dirt along the way." And Anderson wants to know, "when people are so busy trying to take you down, how do you keep on creating?" -[The Feminist Guide To Hollywood]

Sini Anderson will also be filming the show for the documentary. Tickets are on sale.

Kathleen Hanna DJed the sold-out Raincoats show at MoMa on 11/20. Some videos below...