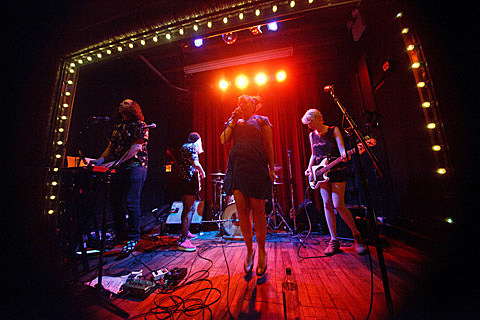 Kathleen Hanna's (Bikini Kill, Le Tigre) new band, The Julie Ruin, who just played a tiny NYC show, will kick off their full tour, which begins in NYC on September 3 at Bowery Ballroom with Swearin'. That show has been sold out for a while now, but you now have yet another chance to catch the band in NYC later on in their tour at Music Hall of Williamsburg on October 25. Tickets for the MHOW show go on sale Friday (8/16) at noon with an AmEx presale starting Wednesday (8/14) at noon. Updated dates are listed below.

Another of The Julie Ruin's recent NYC shows happened at Saint Vitus in June, and Pitchfork just posted a video of them playing "Apt. #5" at that show, plus an interview. Check that out, along with the list of tour dates, below.

The Julie Ruin on Pitchfork.tv +1