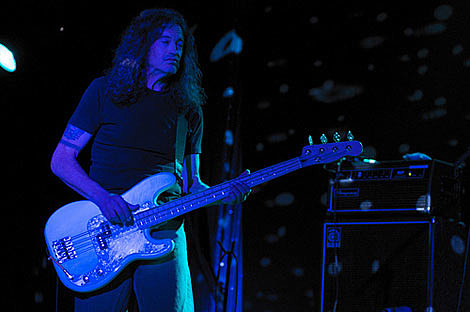 Stubb's in Austin is like Roseland Ballroom in NYC, except it's outdoors, it's conveniently located downtown near all the other venues, and you actually want to go see shows there (in my experience anyway). A lot of the "big" SXSW shows happen there. Last year Stubb's hosted R.E.M. and Motorhead. Metallica is still rumored to be playing there on the Friday night (which may or may not be the same show Jane's Addiction is or isn't playing). It's where the Decemberists will play their new album for the first time on that Wednesday, and it's where Andrew Bird is playing on the Thursday. PJ Harvey plays there that Saturday.

Each Stubb's bill has up to seven artists, and I think more than any other venue, they put together some... interesting combinations. Gomez is playing before Andrew Bird who is playing before Ben Harper. PJ Harvey and John Parrish are opening for... The Indigo Girls who are opening for... Third Eye Blind. AND, last but not least, The Meat Puppets are playing after... KATY PERRY. View the whole schedule, as it currently stands, at SXSW's site.

There are a couple of other big bands playing SXSW this year that I wanted to mention. The first is New York Dolls - they're playing Friday March 20th at 12:30 AM at Smokin' Music. The second is Echo and the Bunnymen - the UK band that recently headlined Radio City Music Hall have THREE official showcases scheduled in Austin, and they're scheduled to play the annual SPIN party at the 2500 (approx)-capacity Stubb's on Friday, March 20th, in the afternoon. Glasvegas, Passion Pit, Hot Leg (Justin Hawkins from the Darkness), Black Lips, and Cut Off Your Hands are also on SPIN's (invite only) bill.