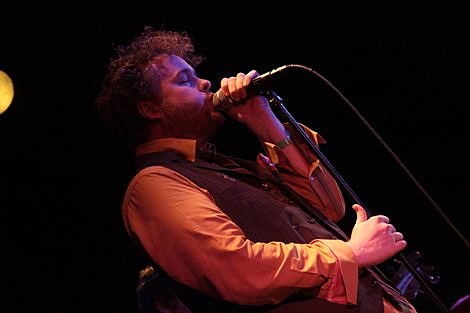 Harvey Danger frontman Sean Nelson, who recently played Cake Shop, plays The Rock Shop on Sunday (tonight, 8/7) as Nelson Sings Nilsson. Inspired by the title of Harry Nilsson's tribute to Randy Newman, Nilsson Sings Newman, he formed the project about a decade ago when Harvey Danger was on hiatus and he started diving into Harry Nilsson's expansive discography. Sean spoke to LAist in 2009 about the project:

When speaking about Nelson Sings Nilsson, you've said that you've been struck by the fact that scandalously few of your peers know Harry Nilsson's music. For those who are unfamiliar with his music, what is the short pitch you give them to acquaint them with this remarkable man?

Well, first I say, "He's the guy who sang 'Everybody's Talkin'' from Midnight Cowboy." And everyone seems to have heard that song. Then I continue with, "And you know 'One [Is the Loneliest Number]'? He wrote that song but wasn't the one who had a hit with it." Next, I talk about "[I Can't Live If Living Is] Without You" and how that's him singing but that he didn't write it. When I mention that one, most people either grimace or say, "Oh, I love that song!" If they still don't know who he is by that point, I say, "You know the 'Coconut' song at the end of Reservoir Dogs?" Everyone gets it by that point. But they still don't know the stuff I think is his best.

Kay Kay and his Weathered Underground, a current project of Kirk Huffman and Kyle O'Quin of the progressive pop punkers Gatsbys American Dream, open Sean's show at The Rock Shop and also act as his backing band. Like Gatsbys, they take from a large variety of genres. You can grab the MP3 for "World's Entire" off their recently released sophomore LP Introducing Kay Kay and his Weathered Underground above. Kay Kay are also about to kick off a tour with The Dear Hunter and O'Brother that hits Knitting Factory on August 12.

They also play the last night of Active Child's residency at The Echo in LA before Active Child kick off their North American tour, which includes the 9/10 Bowery Ballroom show with Com Truise and Young Athletes League. Tickets for that show are still on sale.

All dates and a video below...