Kayo Dot at The Stone (more by Paul Birman) 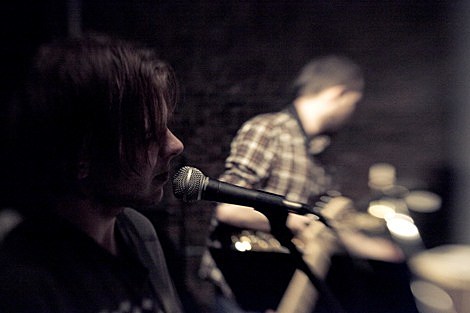 Kayo Dot just celebrated Coyote, and will now show off their new baby Stained Glass (due this fall via Hydra Head) at a show at Bowery Electric TUESDAY (8/24) with Cleric and Bad Girlfriend (who will also play Union Pool with Hallux). The avant garde team will play a pair of sets at Bowery Electric, the second being "an exposé on the bass guitar sound used in Coyote".

Meanwhile, last night at Bruar Falls, Kevin Hufnagel (Gorguts, Dysrhythmia) played a solo show with Religious To Damn (mem A Storm of Light), Fielded, and Psychic Steel. Both Fielded (the solo project of Lindsay Powell of Ga'an/Festival) and Psychic Steel are currently on the road and will loop through Death By Audio TONIGHT to team up with Lichens and Driphouse. Fielded will release Terrageist, the new LP due on September 7th via Catholic Tapes. Dig on "Another Time" above and check out the video/stream some more material below.

Lichens recently supported Hallogallo at Maxwell's, will support Sleep in Chicago (with Ga'an) and is also scheduled to play the now sold-out Sleep show at Brooklyn Masonic Temple on 9/8. Tickets are still available though, for a SECOND (actually first) NYC show for Sleep on 9/6, this time with support from Doomriders and Unearthly Trance (no Lichens).