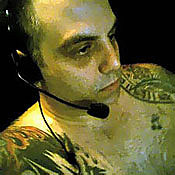 I don't often get freaked or super-saddened by death, but right now I'm feeling serious shock and confusion. It figures too that I would find out about Keith Alexander's death from a bicycle accident ON BOING BOING! The reason it figures is because the last place I expected Keith to pop up was blog world. I had no idea "he was an avid Boing Boing reader, and suggested different things we might find interesting for the blog." I always felt Keith's life mirrored my own in so many ways, so it's only fitting I found out about his death on a blog.

Keith Alexander was one of the most interesting people (and Brooklynites) that I had the privilege of meeting/knowing/worshiping. It was music that introduced me to Keith the famous musician. It was the parallels in our lives that brought me back to him. 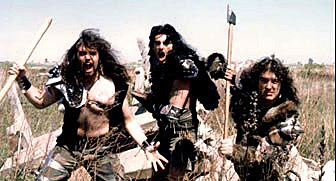 I always had an interest in the sort-of-old-school Brooklyn heavy metal/hardcore scene. I especially like to trace the connections between various bands and their spin-offs. Type O Negative are key in this equation. Before Type O, vocalist Peter Steele sang for the controversial band Carnivore. Keith Alexander was Carnivore's original guitarist. 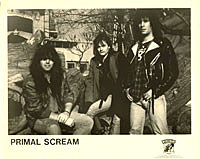 After Carnivore, Keith went on to play with the legendary Primal Scream before finally joining Dee Snider's post-Twisted Sister band of "Sick Motherfuckers."

"I met Dee while working at the Gauntlet in NYC. We reached an agreement regarding my consulting on his movie "StrangeLand." That was cool enough, but a few months into the job, he asks me to audition as a guitar player in his band Dee Snider's Sick Mutherfuckers. We'd be playing 100% Twisted Sister tunes around North America and overseas. I pass the audition and I'm in. Unreal."

Keith also opened the first body piercing studio in Brooklyn, was an active member of the online and offline body modification community, kept up an amazing web presence (regular website, public blog, private blog, etc...) AND recently reinvented himself again as a digital (web site) project manager. On the side he taught some related classes at the New School.

Guess who took one of those classes? I admit I signed up as much to meet the man as I did to learn something that was relevant to me anyway. He was blogging weekly updates on the progress of his full back carp tattoo while I was in his class. He would give us updates in class (like how he was in a bad mood because it hurt and what not). I never told him about my obsession with his music. It probably wouldn't of bothered him though. It was on his personal site that I found out about the classes, and it was in the class that he constantly reminded even the most conservative of students of his personal URL (full of "shocking" details about his life). 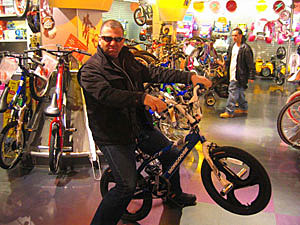 "I look at this place as a scrapbook / journal. A digital version of the paper ones I've kept my entire life. Nothing more, nothing less. Don't read any more into it than necessary. And in a morbid way, a record of my predilections that will hopefully live on after I die, on some server, somewhere. Grandiose? Maybe. Maybe I just have the balls to admit it. Maybe one day, in the year 2201, a relation of mine will see these zeros and ones, and say, "Damn, he had fun." That is, if we don't annihilate one and other."

"Maybe I'll inspire you to be exactly who you want to be. Maybe you'll call me a fool."