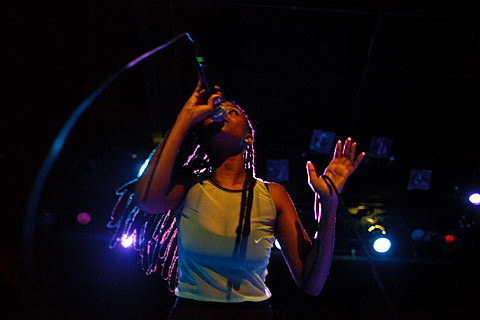 Alt-R&B singer Kelela's last visit to NYC was unfortunately canceled but she'll be back next month to headline MoMA's annual benefit / preview party The Armory Show on March 4 at MoMA's Agnes Gund Garden Lobby. The pricey gala also features a two-hour DJ set from Hot Chip's Alexis Taylor, plus additional DJ sets from Vampire Weekend's Ezra Koenig, plus Business Class (aka Lawrence Abu Hamdan who is also the official commissioned artist for The Armonry Show) and E*vax (Ratatat). Tickets to the party are $175, but VIP and more expensive options (like the $10k Lead Benefactor tickets) get you an early peek at MoMA's Bjork retrospective which doesn't officially open till March 8.

Here's a little more on The Armory Show:

The Armory Show is New York's foremost fair devoted to the most important art of the 20th and 21st centuries. In 2015, the fair will again feature The Armory Show - Modern, a section specializing in modern and secondary market material on Pier 92, while Pier 94 will continue to be a venue to premiere new works by living artists. The opening preview and party for The Armory Show 2015 helps sustain the world-renowned exhibition programming of The Museum of Modern Art.

Kelela's only other announced 2015 dates are SXSW in March and this year's Primavera Sound festival in May.