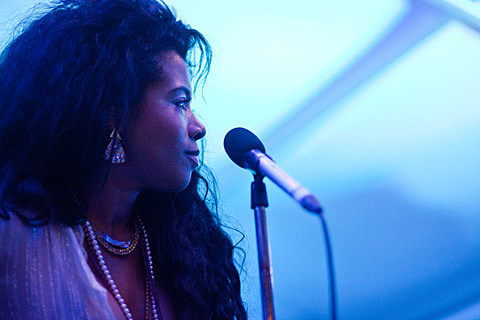 Kelis returned to the live stage at SXSW this year after three years off from touring, and the R&B/neo-soul singer has now announced a full (but brief) North American tour for this June. The tour brings her to NYC for a show on June 13 at Webster Hall. Tickets for that show go on sale Friday (4/18) at noon with an AmEx presale starting Wednesday (4/16) at noon. She also tours Europe before and after. All of her dates are listed below.

The tour is in support of her new album Food which comes out next week (4/22) via Ninja Tune. It's her first album on an independent label, following a decade-plus career of often-underrated pop (she's much more than "the girl who sang 'Milkshake'"), and was produced by TV on the Radio's Dave Sitek. The album is a huge departure from its predecessor, 2010's dance-pop Flesh Tone, instead coming closer to Erykah Badu's (neo) soul and the early '70s days of the genre too. You can hear the whole thing now on NPR. Also at 4 PM EST today (4/14), NPR will host an interview about the album and you can get involved on Twitter. Here's the details:

At 4 p.m. ET on Monday, April 14, we'll all hit play on this First Listen, and for an hour Kelis will take questions and tell stories on Twitter about creating an album that sounds like nothing we've heard from her before. Join the conversation by using the hashtag #AskKelisNPR and following @iamKelis and @NPRandB.

Check out a new live video of "Friday Fish Fry" (performed on KCRW) off the new album, with the list of tour dates, below...