Kendrick Lamar at Roseland in February (more by Dylan Johnson) 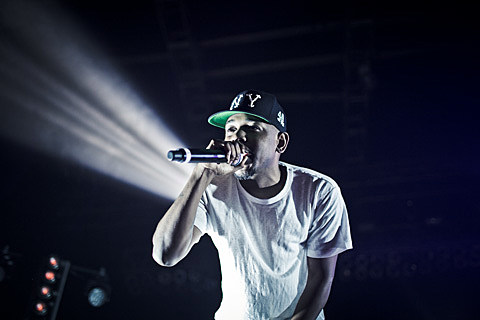 We recently posted that the Hot 97 Summer Jam "Festival Village" lineup (aka the side stage in the parking lot), which features Action Bronson, Joey Bada$$, A$AP Ferg, Smoke DZA, Bodega Bamz, Troy Ave, and more. And now the main stage lineup, which goes down inside of MetLife Stadium on June 2 has been announced, and that one's looking pretty good too. It's got Kendrick Lamar and A$AP Rocky, who both quickly graduated from the side stage that they played last year (but for obvious reasons), in addition to Miguel, Wu-Tang Clan, Fabolous, Wale, 2 Chainz, Joe Budden, French Montana, and, sigh, Chris Brown. Tickets for the whole festival (main stage and "Festival Village" included) are still available. Hopefully no headliners drop off this year.

This show is one of a few that Kendrick Lamar is doing in the NYC-area this year, including his Downtown Music Festival show at Capitale on May 10 with the rest of the Black Hippy crew (Schoolboy Q, Ab-Soul, and Jay Rock) joining him, plus support from Fat Tony. Tickets for that one are still available. Then he plays NYC festival Governors Ball on June 8.

Miguel was originally on Governors Ball too, but dropped off. He, Kendrick, 2 Chainz and A$AP Rocky will also be festival-mates later this year at Jay-Z's Philly festival, Made In America in August, which also includes Beyonce, Queens of the Stone Age, Nine Inch Nails, Phoenix, Solange, and others. Tickets for that festival are still available.

Meanwhile, A$AP Rocky has many other tour dates too, including NYC-area dates on May 4 and 5 at Barclays Center with Rihanna (both sold out), and on August 2 at PNC Bank Arts Center, August 6 at Jones Beach, and August 8 at Comcast Theatre with Wiz Khalifa, Joey Bada$$, Rockie Fresh, Smoke DZA, and others. Tickets for those shows are still available.