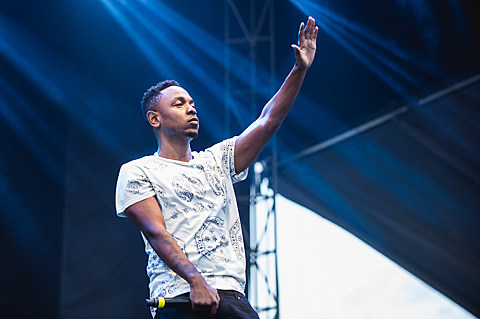 Kendrick Lamar is being sued by Eric Reed and Willie Jones III, who claim he ripped off their song "The Thorn" for "Rigamortis" off 2011's Section.80, reports TMZ. According to the article, in their lawsuit Reed and Jones "say Lamar took their music, and simply added his own lyrics. They say "The Thorn" isn't merely part of "Rigamortis" ... IT IS "Rigamortis."" They're suing for at least $1 million, as well as all profits and rights to "Rigamortis." Compare both songs below.

In happier news, Flying Lotus put out "Never Catch Me," the Kendrick collaboration from his upcoming album, You're Dead!. It's the kind of trippy, jazzy stuff we've come to expect from FlyLo and Kendrick's appropriately in total psych-rap mode. Check it out below.

For something new from Kendrick that's more down to earth, he's also on the remix of "Holy Ghost" by Jeezy which just came out. (The original is on Jeezy's new Seen It All: The Autobiography LP.) You can stream that below as well.