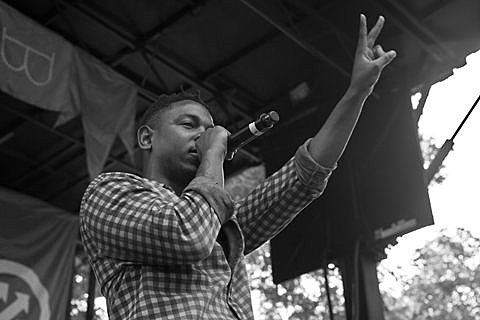 Kendrick Lamar is set to release his major label debut, good kid, m.A.A.d. city, on October 2 via Interscope/Aftermath/Top Dawg. In an interview with WGCI's 107.5's "The Morning Riot" (via HipHopDX), Kendrick revealed that the album will feature few, if any, guest appearances. So it looks like the extent of Dr. Dre's (who runs Aftermath and was featured on Kendrick's song, "The Recipe") involvement is still up in the air. The album's first single, "Swimming Pools (Drank)," which was produced by T-Minus, recently dropped and you can stream it below.

Kendrick will be supporting the album on a tour this September and October, which hits NYC for a show on September 15 at Terminal 5. Tickets for that show are not on sale yet, but check Ticketmaster for updates. He'll also be in the NYC area even sooner with Schoolboy Q when their tour supporting Mac Miller and Wiz Khalifa hits Jones Beach on August 2. Might be worth waiting for the T5 show though...

In other news, after Lady Gaga showed up to watch Kendrick Lamar at Pitchfork Festival, Kendrick told The Source that Gaga is "a real good friend." Don't tell Marilyn Manson.

A list of all dates on Kendrick Lamar's upcoming tour and the "Swimming Pools (Drank)" song stream are below...