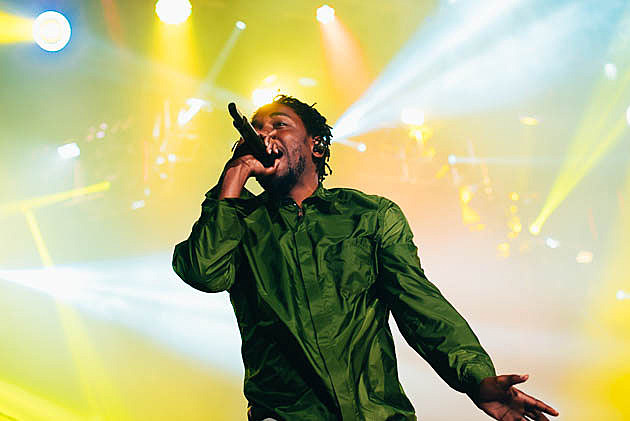 Ever find your life lacking substantial entertainment? Well, if so, it's a good thing our pals at Fox News exist to flip that occasional boredom on its head. They've long been so very adept at analyzing the social correlates of hip hop, and their recent The Five panel reportage re: Kendrick Lamar doesn't disappoint (read: greatly disappoints).

As you may have seen, Kendrick opened the BET Awards this year with a raw, honest performance of "Alright" atop a vandalized police car, rapping "We hate po-po / Wanna kill us dead in the street fo sho" with a huge American flag snapping behind him. Of course, Fox had something to say (and to keep your head shaking, they only subtitled certain lyrics to change the song meaning).

"Ugh, I don't like it... Personally, it doesn't excite me, it doesn't turn me on, it doesn't interest me, I'm not feelin' it" was the genius insight we got from Kimberly Guilfoyle. And then, from Geraldo Rivera:

It's not helpful at all. This is why I say hip-hop has done more damage to African-Americans than racism in recent years. This is exactly the wrong message. And then to conflate what happened in the church in Charleston, South Carolina with these tragic incidents involving excessive use of force by cops is to equate that racist killer with these cops - it is so wrong, it is so counterproductive, it gives exactly the wrong the message.

Kendrick appeared on TMZ Live today with an elegant response to Rivera's comments (via HipHopDX):

This is our music. This is us expressing ourselves. Rather [than] going out here and doing the murders myself, I want to express myself in a positive light the same way other artists are doing. Not going out in the streets, go in the booth and talking about the situation and hoping these kids can find some type of influence on it in a positive manner. Coming from these streets and coming from these neighborhoods, we're taking our talents and putting 'em inside the studio.

He also added that Rivera took the "we hate po-po" line out of context and said, "you can't dilute the message." If you haven't seen it yet, you can watch that Fox News clip below.

In other Kendrick news, the video for his Bilal collab, "Money Over Love" recently premiered. It's one of the singles off Bilal's fifth studio album, In Another Life, which Bilal has been on tour supporting. He hit NYC last night (7/1), with a show at Highline Ballroom (pictured above). Were you there? How was it?

Check out the "Money Over Love" video, and that Fox News segment, below...