Kevin Devine, The Get Up Kids, The Gloria Record, We Were Promised Jetpacks, Illuminati Hotties, Vinnie Caruana (The Movielife, Constant Elevation), Chris Farren, Into It. Over It., Nervus, Proper., and more are on board to do live "in-store" performances on UK label Big Scary Monsters' virtual pop-up, which begins July 27 at 11 AM ET and runs through August 2.

There will also be interviews (with Kevin Devine, Chris Farren, Martha, Delta Sleep, and more), and exclusive merch, including rare test pressings and colored vinyl. The pop-up will be raising money for Black Lives Matter UK and #saveourvenues.

For The Gloria Record, this will be a rare performance following the recent 20th anniversary reissue of the defunct band's classic A Lull In Traffic EP. It also follows singer Chris Simpson (also of Mineral) recently breaking out a Gloria Record song on his solo acoustic quarantine series. When we asked Chris if the band might reunite when the pandemic ends, he said, "That would be really fun. I think there’s always still a hope that we’ll finish some or all of the unfinished material. [...] It would be a challenge, but… we still dream."

You can watch (starting 7/27) and get more info at bsmrocks.com/popup. Full lineup and list of merch below. 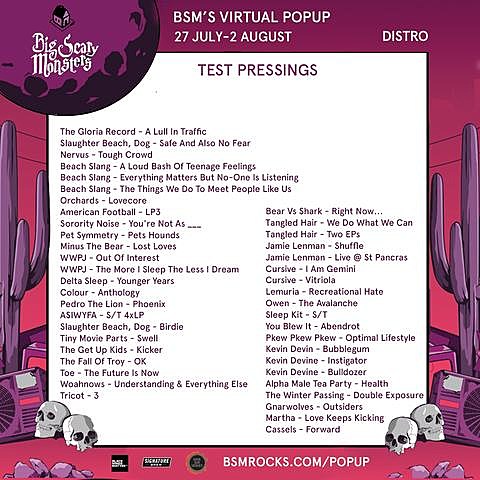 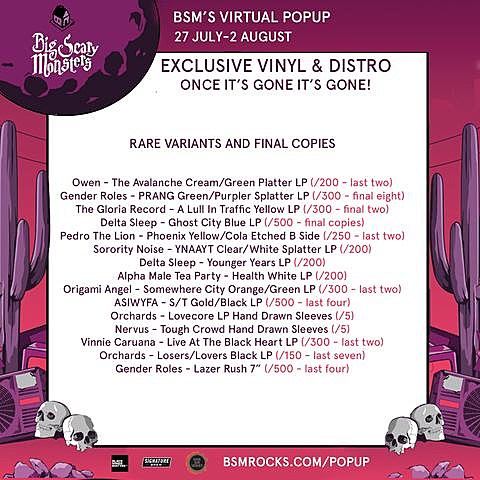 Filed Under: big scary monsters, Chris Farren, Delta Sleep, illuminati hotties, Into It Over It, Kevin Devine, Livestream, Martha, Nervus, Proper., The Get Up Kids, The Gloria Record, VInnie Caruana, We Were Promised Jetpacks
Categories: Music News
Comments
Leave A Comment
Back To Top