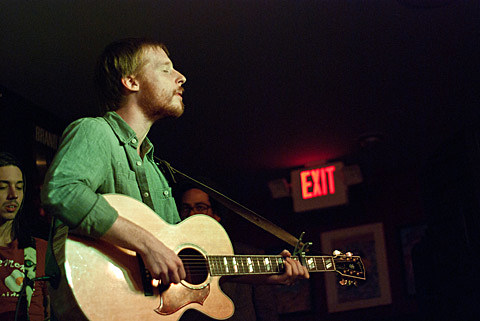 Last year, Kevin Devine simultaneously released two albums, Bubblegum and Bulldozer, which both included different versions of the song "She Can See Me." Today, he put out a 7" for that song on Bad Timing Records, Devinyl Records and Favorite Gentlemen Recordings which features both versions of the track, and in honor of release day we've got the premiere of the video for the Bubblegum version. Though the album titles might make you think otherwise, the Bubblegum version is actually the heavier of the two with some sludge metal-inspired riffs thrown in there. Check out the video (dir. Jordan Noel) with the full cast credits, below.

Kevin was in NYC earlier this month for an intimate solo show at HiFi Bar, and he'll hit the road for a full solo tour in 2015 with Into it. Over It.'s Evan Weiss (solo) and Laura Stevenson. That triple bill doesn't hit NYC, but there are nearby shows in New Haven and Philly. All dates are listed below.

Kevin and his band also play the BV-presented 'Champagne Jam' at Webster Hall in December with The Front Bottoms, Craig Finn, The So So Glos and more. Sold out.