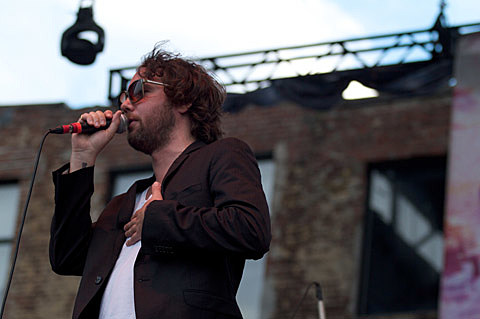 Broken Social Scene co-founder Kevin Drew already revealed "Good Sex" and "Mexican Aftershow Party" from his new solo LP, Darlings, and he's now made the entire album available to stream ahead of its March 24 release date. Listen over at NPR or below via The Line of Best Fit (which may now blocked in the US).

As discussed, Kevin will play an album release show in NYC at Bowery Ballroom on April 3. For that show, he'll be joined by longtime collaborators Charles Spearin and Ohad Benchetrit (Do Make Say Think, Broken Social Scene), Dean Stone (Apostle of Hustle), Dave Hamelin (The Stills, Eight and a Half), and Marty Kinack (Broken Social Scene).

Since we last spoke, it's been announced that the release show will be opened by Andy Kim, aka the Montreal songwriter who co-wrote "Sugar, Sugar" for The Archies in 1968, and has also released his own singles, like "Rock Me Gently," which was a #1 hit in 1974. Tickets for the show are still available.

Kevin was also added as an opener to Feist's four-date solo tour, including the NYC-area stop happening on April 10 at Tarrytown Music Hall. Tickets for that show are still available.

All of Kevin's dates are listed, with a stream of his new LP and a couple Andy Kim videos, below...