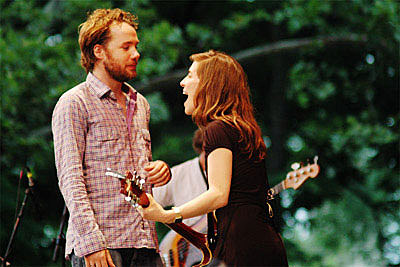 Gothamist: Broken Social Scene’s music has been featured on movies and TV shows. Have you licensed any of your songs for advertising?

Kevin Drew: No, we turned down a lot, a lot of commercials. And you have to understand that this was the last move we could make when we were starting out as a band, in terms of sort of making some kind of statement that we didn’t want to be an advertisement. But now, even compared to two years ago, it’s just completely different. There used to be a textbook you had to follow to be an independent band but that doesn’t even exist anymore.

Commercials are now the new mainstream radio and there’s not even an element of anyone suspecting a band is selling out anymore when you go and do commercials. That is now the way for you to get your music out there, that is the way for people to hear your music and purchase your records; it is the strongest force for getting your music out, which is fucking crazy! But it’s not my battle, you know. I think a lot of bands have been foolish about it and put their songs in really stupid commercials and I think a lot of people have been very smart about it and put their songs in very good spots.