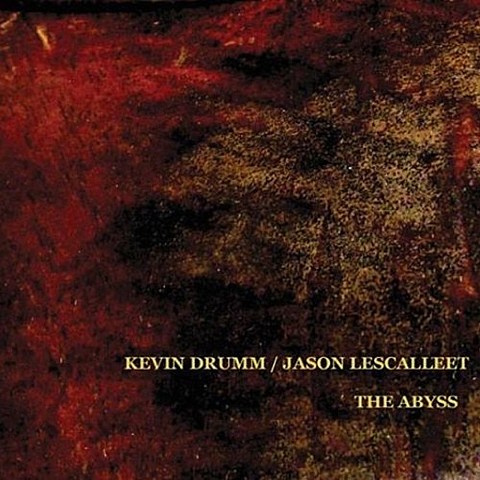 The prolific Kevin Drumm and Jason Lescalleet have crossed paths before, cutting the EP The Invisible Curse last year which received the wink-wink Soundcloud tag of 'power ballad.' Their newest collaboration is The Abyss, out on Erstwhile Records and available at Jason Lescalleet's Discogs store. For this album, both droners sink their teeth into something darker. Or, at least, that's the spin I put on it. That filtered-through-the-self reaction is one quality making drone unique and fascinating to those who regard it as more than a wall of noise. Good drone, the stuff we have here, is like an executable program rather than a concrete statement of purpose. It'll swallow what you're feeling, run it though its internal workings, and spit something out that tells you as much about yourself as the artists that made it.

The nine minute preview we've received of the near-50 minute "The Echo Of Your Past," a cut culled from the second of The Abyss's two discs, opens with a deep bass rumble, sounding like a plane damned to taxi for eternity. It's an expansive tone, something of a sound engineering marvel. More abstractly, it's like Drumm and Lescalleet uncovered the pitch of a planetary body grinding against dark matter. But, like good drone, it operates under the idea that there's an infinite amount of infinity within every nook and cranny. Phantom tones rise and fall in the background before another set of machinery starts crunching away in the sample's middle. From there, "The Echo Of Your Past" modulates into a stinging major chord.

So. . . what does it mean? Is it Proustian recall in slow motion? Is it a way to engage with the fact that recorded sound is always in the past, never in the present or future? Or is it just meant to inspire whatever it inspires, a brief detour to mindfully explore our existence, a pursuit we usually avoid while attending to self-imposed day-to-day tasks? As music's mood ring, drone would probably just answer, "Yes. Yeeeeeeeeeeeeeeeeeeeeeees." Drumm and Lescalleet do a great job providing the right confines for that Q&A.

Kevin and Jason will celebrate the new album with a release show on September 4 at Trans-Pecos with support from violinist C Spencer Yeh. $10 at the door gets you in.

In addition to The Abyss, Kevin Drumm will release Trouble via Editions Mego on October 13 which the label has tagged as one of his quietest albums. You can hear a sample here. And Jason Lescalleet dropped Much to My Demise this year, the album that he toured to support in April.

You can hear "The Echo Of Your Past" below.