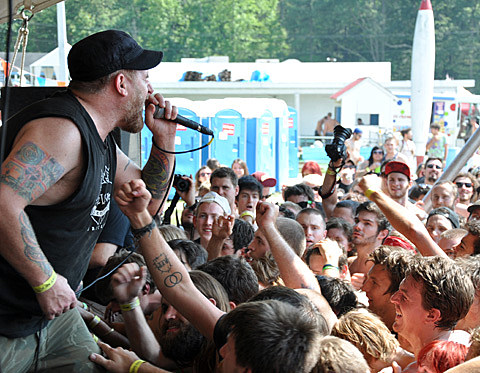 As you may know, punk vets 7 Seconds recently released their first new song in eight years. Did you like it? A lot of people didn't apparently, and with the internet the way it is, those naysayers' voices were obviously heard. Well, Kevin Seconds didn't take too kindly to the haters on this one, and posted a long message on Facebook responding to them. An excerpt reads:

But first and foremost, we make music for us and to nurture our desire to express, communicate and have a kick-ass time in the process. We love and respect the thousands and thousands of people who love what we've done and what we've said but ultimately, it's about the 4 members of this band.

That has ALWAYS been where it starts and ends for us.

After that, it's all about getting out what we do and hoping it resonates with people who have a fierce love for spirited, aggressive, melodic, message-laden rebel music.

We don't expect (nor do we trust) people who find brilliance in auto-tuning every last vocal part and love music so heavily tampered with and processed, it sounds like it's coming out of a computer's asshole.

You can read the full message at the bottom of this post.

As discussed, 7 Seconds will be headed to Philly soon for the This is Hardcore festival. They play the third day (8/10) with Judge, H2O, Ceremony, Defeater, Nails, and more. Tickets for the festival are still available.

That festival appearance falls right in the middle of Kevin Seconds' solo tour, which he kicked off yesterday with Kepi Ghoulie (of Groovie Ghoulies). As briefly mentioned earlier today, that tour comes to NYC on August 13 at Bowery Electric. Tickets for that show are on sale now. It also hits Asbury Lanes on August 11.

All dates are listed on the tour flyer, along with the rest of his message, below... 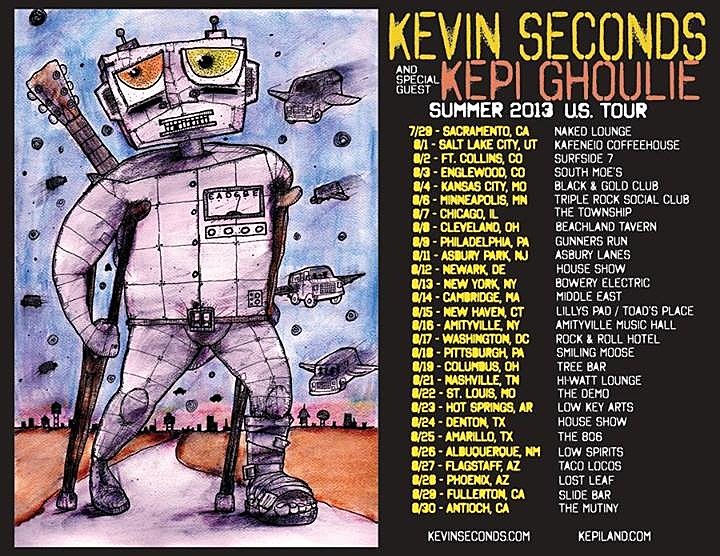 just have to end this day by giving thanks to all of our (7Secs) friends and fans for the outpouring of love and loyalty shown today, after the release of the promo vid put out by our new record label Rise.

I got a few private messages - from people who were genuinely upset by some of the negative comments about the band and the song posted on YouTube - that touched me greatly and i'll state here publicly what I stated to them: you don't hang around as a band for as long as we have without having bank vault-thick skin, a good sense of self and purpose and a healthy sense of humor, and when lightweights and fad-weened internet-raised whiners get their panties in a bunch because their favorite record label ducks tradition and signs an old hardcore band, you just KNOW certain people are doing something right.

Let me make this perfectly clear (and i said this just before the release of Good To Go and Take It Back, Take It On, Take It Over), 7Seconds isn't still around, in hopes of gaining legions of new fans.

Of course we all still get a thrill when a youngster comes up and tells us how much our band means to him or her and we love that there are younger people who discover us and old band like us every day.

But first and foremost, we make music for us and to nurture our desire to express, communicate and have a kick-ass time in the process. We love and respect the thousands and thousands of people who love what we've done and what we've said but ultimately, it's about the 4 members of this band.

That has ALWAYS been where it starts and ends for us.

After that, it's all about getting out what we do and hoping it resonates with people who have a fierce love for spirited, aggressive, melodic, message-laden rebel music.

We don't expect (nor do we trust) people who find brilliance in auto-tuning every last vocal part and love music so heavily tampered with and processed, it sounds like it's coming out of a computer's asshole.

Personally, I make no bones about the fact that I LOATHE the mentality of many of these "scene kids" who now have such a huge hand in shaping what makes up today's "alternative rock" music community.

Fuck these people. We've all sat around for the last 10 or so years waiting for them to come up with something revolutionary, dangerous and interesting and what do they come up with?

Fucking screamo, crabcore and the latest take on the pig squeal vocal technique.

Not ONE thing that hasn't been ripped off or done better by someone else before. And they're all so busy bending over for free swag (clothes, energy drinks, gear), they can't be bothered to come up with some way to keep from looking and sounding EXACTLY like the other 13,000 bands they share record label, management and festival bills with.

Yet they claim to love "hardcore" and feel utter confusion and un-familiarity and unbridled anger when they hear a band like 7Seconds. especially when it broaches into territory they consider their own.

You don't have to like or respect my band but when you show your ignorance and narrow state of mind by not having even the most vague understanding of the lineage between say, the Sex Pistols and what your crappy bands are attempting to do now, you're just lazy and you cannot be taken seriously.

But this mentality and these people have about as much appeal to us as the violent hardcore thug kids or the white power boneheads who hated us but still came to our shows years back and who helped to almost bring live shows within the hardcore community to a screeching halt.

So many of these bands and their fans don't look like they're enjoying life or having all that much fun. Why would we want them as fans?

We just don't. It's as simple as that.

I know that, as an old fart, I'm not suppose to say such nasty things. As someone who has made countless attempts to make positive statements through my music, while living in a shit-filled, often-horrific world, I'm suppose to be better and bigger than that and just let it ride and not go out of my way to voice my disdain or acknowledge the differences between "us" and "them".

As a working musician and artists, I should probably also be smart and consider my "career" when openly discussing things like politics, religion, music and current events.

Better to keep quiet and try and appeal to EVERYBODY, right?

Fuck that shit. If I offend people by things I believe and speak on, so be it. No one dies from being offended by the words of someone else. Getting offended every once in awhile is good for us all.

Anyway, the over all point here is that we LOVE that our fans are intelligent and independent and thoughtful and funny and creative and yes, rebellious. We love that they are young and old and that they come in all shapes, sizes, colors and sexual, political and spiritual orientation.

Some of the best and brightest people in the world, who are out there doing amazing things, and not just for themselves, grew up listening to and loving punk rock and hardcore music.

And yes, my band 7Seconds.

We are nothing short of honored and humbled to have been a part of this wacky musical sub-culture and lifestyle for 33 years and if we never gained one more new fan ever again, I wouldn't give it a single thought.

There are a whole lot of people who seem way too bent out of shape over Rise Records signing us. I can see why people would consider signing an old hardcore/punk rock band who hasn't made a new record in 8 years and who doesn't tour all that much a risky move for a successful, yet still growing label like Rise. Why some are taking it so personally and getting so upset over it is beyond me but that's the way it goes.

A few months back, I was convinced that Rise was the record label for us but after yesterday, I am even more convinced we made the right choice and am thrilled and proud that we did.

Anyway, thank again to all of your kind and wonderful words and display of support over some of these YouTube comments. I found much of it to be so fun and entertaining, I had to stop myself from using some old sock accounts to add to the onslaught.

Thank you also for reading this long-winded rant and for your love and support. Honestly. I hope you all know how much we appreciate and love you back for it.