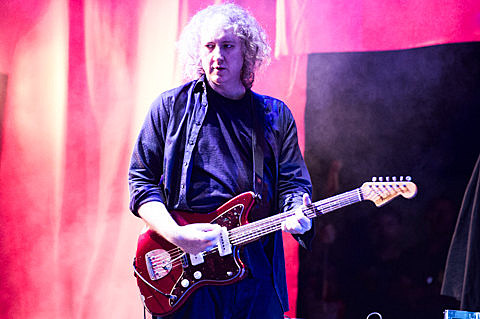 As you may have seen, the "shortlist" nominees for the UK's prestigious Mercury Prize were announced earlier this week. Perhaps the most conspicuous omission was My Bloody Valentine's much-lauded MBV. Whether you think it was an awesome comeback or not, it is the kind of record that normally at least gets nominated (see Bowie's The Next Day). The reason it's not, claims glide guitar maestro Kevin Shields tells The Guardian, is that the album is too independent:

"We're banned by them, and do you know why? Because we're not on Amazon or iTunes. That's one of the qualifying criteria. You have to have major distribution or be on iTunes or Amazon."

Shields may be correct. According to the terms and conditions on the Mercury website, qualifying albums will have "a digital and physical distribution deal in place in the UK". My Bloody Valentine, who self-released their album, only sold the digital version of mbv through their own website. This may not be considered a "digital distribution deal".

"We released our record, mbv, independently," Shields said. My Bloody Valentine didn't even rely on an indie label such as Domino or Alcopop! Records. "It's interesting to learn that to be as independent as we are is ... virtually illegal," he said. "It's not a real record. Our album's not a real album because it's independent. The corporate-ness has got to such a point where we've essentially been told that we don't exist. So, technically, that album doesn't exist. OK? It's not allowed to exist according to the Mercury prize." - [The Guardian]

Shields goes on to say he has no regrets about self-releasing the album. The CD of MBV is currently available to buy on Amazon (who allow third-party sellers), but not digitally. The Mercury Prize, which looks to be a race between Bowie and Arctic Monkeys, will be announced October 30 in London.

My Bloody Valentine, meanwhile, are set to hit the East Coast in November, including two shows at NYC's Hammerstein Ballroom. Tickets for that show go on sale today (9/13) at 10 AM.