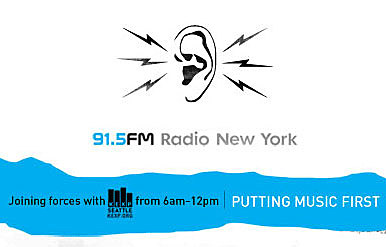 KEXP and Radio New York liberate listeners from the norm

"This partnership will not only give greater voice to artists from the Northwest, New York and around the world, it will bring music that matters into the lives of more listeners than ever before," said Tom Mara, KEXP executive director.

Radio New York already has a very successful television channel and is now setting its sights on radio. "Radio is the next great frontier and re-launching Radio New York 91.5 FM in partnership with such a strong brand as KEXP makes perfect sense," said Arick Wierson, general manager of NYC Media Group.

Through the Radio Liberation partnership, KEXP will be able to reach another 14 million terrestrial listeners in New York, sharing Seattle's unique music community with New Yorkers.

"Radio New York will bring a fresh new sound to New York radio and galvanize a community hungry for great content," said Matthew Tollin, CFO/GM of Radio Operations for NYC Media Group. "Listeners will get the opportunity to fall in love with radio all over again."

As part of the partnership, KEXP and Radio New York will produce hundreds of live performances a year. With increased access to New York bands and touring artists, Radio Liberation will also bring additional "in-studio" performances to listeners on both coasts.

"We have always been about the listener and the artist," said KEXP DJ John Richards. "We all share a passion for music."

ABOUT KEXP PUBLIC RADIO
KEXP is an influential, non-commercial radio station based in Seattle and supported through financial contributions from listeners and businesses worldwide. Over the last three decades, KEXP has built a reputation as a champion of new and emerging artists and musical forms. Today, KEXP programs a rare mix of music spanning multiple genres and the station brings listeners more than 380 live, in-studio performances each year.

KEXP has a mission to enrich people's lives by providing a wide array of music and by exploring, developing and applying relevant technology to deepen and extend musical experiences. Listeners enjoy KEXP at 90.3 FM in Seattle and around the world at KEXP.org.

The station is governed by the Friends of KEXP, a nonprofit organization that operates the station on behalf of the University of Washington, which holds the FCC license. A partnership with Vulcan Inc. provides facility support and programming collaboration. The University of Washington's information technology group provides KEXP with the development and application of streaming services, technical expertise and other relevant technology to extend the music experience.

ABOUT RADIO NEW YORK / NYC MEDIA GROUP
Launched in January 2005, NYC Media Group is the entity responsible for managing the media assets of the City of New York including one broadcast television channel and five cable television channels known collectively as NYC TV; one broadcast radio station, Radio New York (Radio New York 91.5 FM); as well as production and syndication arms that produce and distribute New York City-centric content all over the world across multiple platforms. Over the past three years, NYC TV has won 14 New York Emmy Awards and been nominated 34 times. The network has also been awarded 14 Telly Awards for its outstanding content.