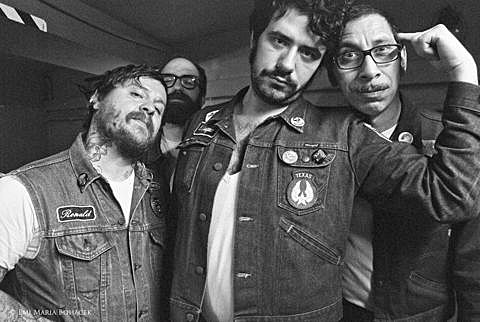 Kid Congo Powers has an impressive resume, having logged time in The Gun Club, The Cramps and Nick Cave and the Bad Seeds. He's also stayed busy with his own music which hinges on his oversized personality: part garage rocker, part louche lounge act. (Sometimes at the same time: see "The History of French Cuisine.") He just released Haunted Head with his band The Pink Monkeybirds that leans more toward garage (stream it at Spotify); and a non-LP single, "Conjure Man," which swings towards lounge, and you watch the video for that below.

While he hasn't announced a full tour (UPDATE: Full tour dates are below), Kid Congo & the Pink Monkeybirds do have fall dates lined up, including NYC at Mercury Lounge on October 21. Tickets to that show go on sale Friday (6/7) at noon. He's got a few with Jon Spencer Blues Explosion as well and all dates are listed below.