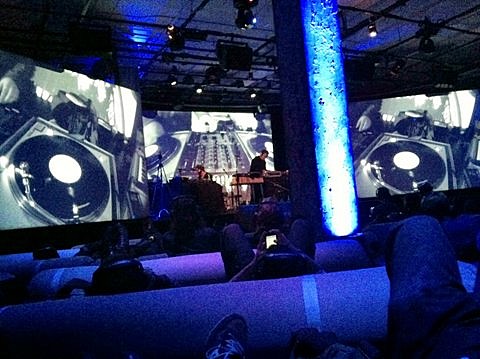 In addition to all the other shows during M for Montreal 2012, we were treated to a Friday afternoon performance by Kid Koala at Le SAT. We were handed wireless headphones on the way in and were invited stretch out against long, inflatable tube/cushions that were made just for this performance which was mainly to promote his children's book (and accompanying album), Space Cadet (which he toured earlier this year). Kid Koala (aka Eric San) performed in the middle with a camera on the decks which was projected on three screens around him. He played songs (including a new track with Damon Albarn and Dan the Automator), told stories, read from his book and even donned a Koala suit for his contribution to Yo Gabba Gabba. There were also games and other audience participation moments. It felt more like we were hanging with him in his basement than at a show, and he was an affable host.

Kid Koala is gearing up to tour another project, his new record 12 Bit Blues, and that will hit NYC on November 21 at Music Hall of Williamsburg and tickets are still available.. Like the Space Cadet tour, it's a multimedia extravaganza and promises puppets, dancing girls, robots, a giant cardboard turntable and more (but no headphones, for the audience at least).

A list of all tour dates, along with a full album stream of 12 Bit Blues is below.