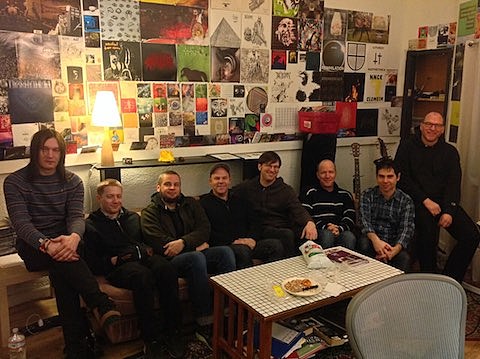 A group of players like this bring a lot of heavy skronk, dissonant noise, and krauty/jazzy rhythms, with Moody's vocals and lyrics an integral part of the mix. Moody says:

It was really important to me to be reactive with respect to the amazing musicians I was working with. It was, in fact, important for me to be IN the band, not separate from the band. Another instrument in the orchestra, rather than something fused onto the music. Not lyrics in front, and music behind, but all one instrument.

You can hear the entire The Unspeakable Pratices album right now -- a stream of the whole album makes its premiere in this post. Check it out below.

The Unspeakable Practices will play a record release show at Brooklyn's Secret Project Robot on Friday (11/6) with a slightly different lineup than on the LP:

Greg Fox and Invisible Circle are also on the bill, plus it's Kid Millions' birthday. $10 at the door.