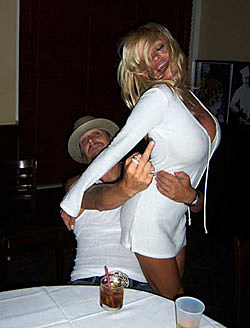 You know you want to get tickets Saturday for the Kid Rock show happening at the Irving Plaza (Fillmore) on October 9th. The show is part of "a series of intimate concerts" he's doing to promote his new album "Rock N Roll Jesus". All tour dates below...

As far as Kid Rock is concerned, October 9th can't get here soon enough. America's "Devil Without A Cause" will turn more than a few heads with his new studio album, "ROCK N ROLL JESUS." Recorded at his Clarkston Chophouse studio in Clarkston, MI, the album was produced by Kid Rock and Rob Cavallo, and sees Rock backed by his long-time Twisted Brown Trucker band, with additional vocals by the Fisk Jubilee Singers.

Easily the artist's most provocative work to date, the album tackles themes such as race relations, religion in America, and, of course, sex. The album's first single, "So Hott," is racing up the rock radio charts, already hitting the Top 10 with the loving sentiment, "I want to f**k you like I'm never going to see you again." VH1 took the risk of premiering the provocative video this past Saturday on their Top 20 Countdown.