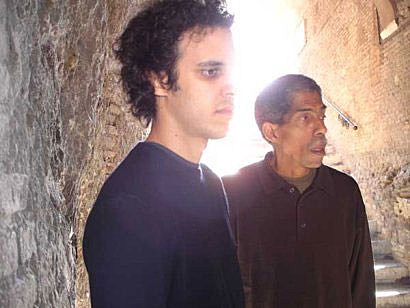 Reid and Hebden have made several albums together by now, including the excellent Tongues in 2007. Those sea legs seem to have a mighty short half-life, though: Reid's creative phrasing and pulse games are, as always, a fascinating contrast to the rigid rhythmic grids typical of Four Tet constructions, but on NYC [their album releaesd November 3rd by Domino] the pair doesn't seem to find a happy middle ground anywhere. With Reid on tap, ready to dive in headfirst with limbs flailing and very few responsibilities, you almost have to wonder whether Hebden just found himself in over his head; the album may have been considerably more focused if Hebden had sampled Reid's performances and woven them in as loops. But that would defeat the whole point of the project, now wouldn't it? [Popmatters]

Kieran and Steve play (le) poisson rouge in NYC tonight/Friday December 12th. Later that night is a Glitch Mob party at the same venue. All Kieran dates below...