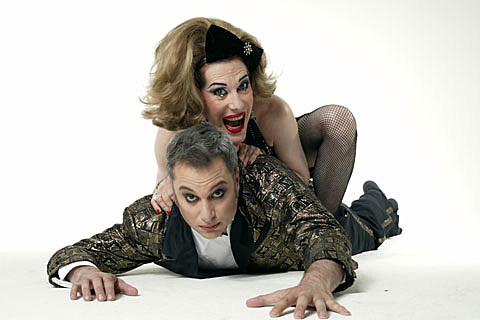 Mr. Mellman compared their characters to a radioactive yo-yo trick. "What makes it special makes it dangerous," he said. "There's a lot of intensity and a lot of craziness. We had to step away. We were so deeply in it."

In their eight years away from the stage, "we've both gone on to achieve goals that we're proud of separately," said Bond, who has since written books and produced the art exhibition "The Fall of the House of Whimsy." Mr. Mellman is a member of the band Julie Ruin and has remained in cabaret with acts like Bridget Everett's.

As for the retired lounge singers, who maintain their own fictional biographies, "We have to come up with where Kiki and Herb have been," Bond said. They have a few jaw-dropping ideas in mind -- mostly involving a stint reporting for Al Jazeera in Syria. Joking about the Middle East may reek of political incorrectness, but then again this is the same Kiki DuRane who claims to have known Jesus "in the biblical sense."

Legendary lounge/cabaret duo Kiki and Herb (aka Justin Vivian Bond and Kenny Mellman) went into retirement in 2007 but they'll be returning to the stage for a run at NYC's Joe's Pub from April 21 to May 6 for a show they're calling "Kiki and Herb: Seeking Asylum!" The run is sold out but there's still hope: a limited number of tickets given away free each night via lottery, details still to come.

The K&H reunion is part of a year-long Justin Vivian Bond retrospective at Joe's Pub that kicked off with "Dixie McCall's Patterns for Living" which just finished it's run. Next up: "Justin Vivian Bond and The Freudian Slippers: The Lost Show" on November 14 & 16 (tickets); then holiday show "Angels We Have Heard When High" which runs from December 16-23 (tickets); and then Valentines Day show "Love is Crazy" (details TBA) and more.

Watch a video of Kiki and Herb at Knitting Factory, below...