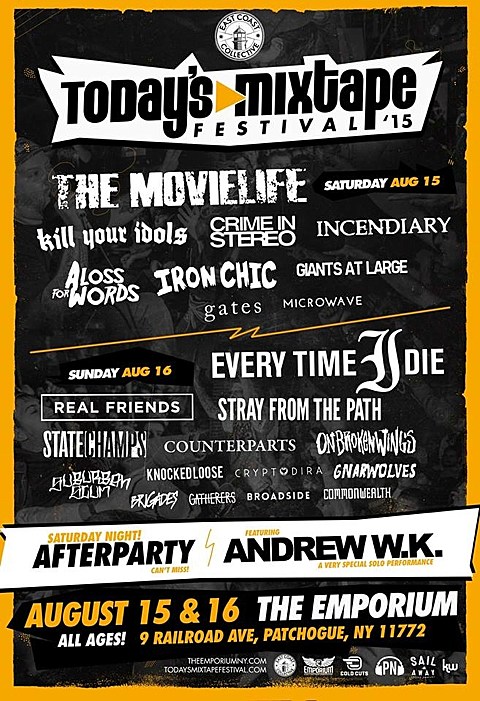 Long Island's Today's Mixtape Festival, happening August 15-16 at the Emporium in Patchogue, recently expanded its lineup and announced single day lineups. Saturday is really the day to go, with recent additions Kill Your Idols and Crime In Stereo joining the previously announced The Movielife, Iron Chic, Incendiary and more that day. Plus, Andrew WK plays the afterparty on Saturday which you can get into with a Saturday pass. The various ticket options are on sale now. Updated flyer above.

Ahead of that fest, you can catch Crime In Stereo and Incendiary together in NYC, at Saint Vitus on July 3 with Royal Psalms opening. Tickets for that are on sale now.

The Movielife also curated the upcoming iDobi Meltdown Festival happening at NJ's Starland Ballroom on June 26 & 27. Night 1 has Lifetime, The Menzingers, Laura Stevenson and Worriers; and night 2 has The Movielife, Balance & Composure, Make Do and Mend and Timeshares. Tickets for both nights are still available. The Movielife were also recently announced for Riot Fest Chicago.

Kill Your Idols were last seen in NYC opening one of the H2O 20th anniversary shows at Saint Vitus in May. Watch a few videos from that below (by Dave Stambach). H2O recently announced two NYC shows with Rancid (tickets).