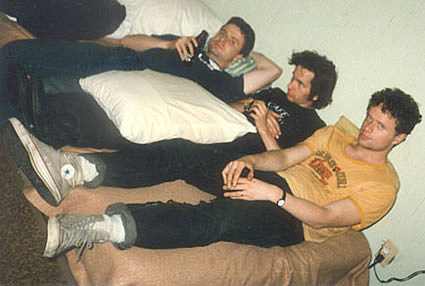 Killdozer played with all original members at Touch and Go Records' 25th anniversary celebration in Chicago, Illinois on September 9, 2006. To promote the event, flyers declared "Fuck You, We Reunite!", harkening back to the name of their farewell tour ("Fuck You, We Quit!) [Wikipedia]

It isnt the first time that they reformed, but it is the first time that they've played NYC in over ten years. Killdozer have announced six shows beginning in their hometown of Madison, Wisconsin with a date at The Knitting Factory in NYC on November 2nd and concluding at the Fun Fun Fun Fest in Austin, a festival whose lineup they share with Cro-Mags (Jam), Walter Schriefels, The Dead Milkmen and many many many others.

Killdozer 2008 is still all original members. That includes Michael Gerald (vocalist, bassist, founder), Dan Hobson (original drummer), and Bill Hobson (original guitarist). It has also been confirmed that Paul Zagoras (guitars from 1993-1996) will join the band for some songs in Wisconsin. No NYC tickets yet. All dates below...