As you can see above, El-P's special guests for his upcoming show at Santos on May 21 will include none other than Killer Mike! The Atlanta MC, who also plays a free show at Brooklyn Bowl with DIIV three days later, will join Jaime Meline for his Cancer for Cure release party along with Despot and more special guests. That makes Mr. Muthafuckin' eXquire the only artist that isnt officially on the Santos show from the upcoming tour with El-P and Killer Mike. No word on if he'll show up as well, but considering his proximity... it's definitely possible. Tickets are still available. UPDATE: special guests confirmed: 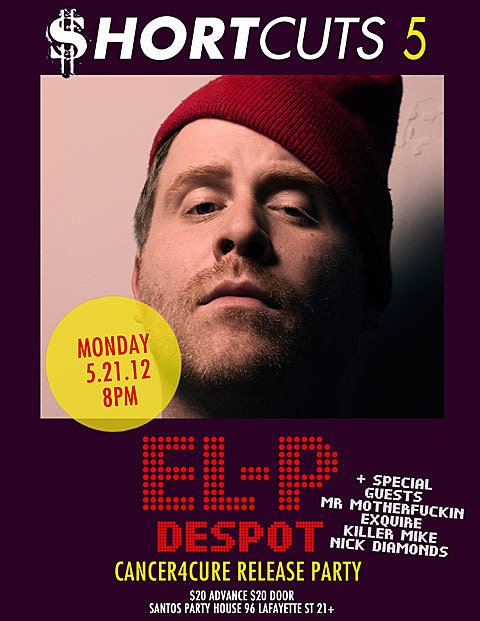 In other El-P news, he recently released another new trailer Cancer for Cure. But no need to wait because you can also now stream the LP in full. El-P recently performed "Stay Down" with Nick Diamonds on David Letterman (on 5/15), check that out along with the trailer below.

Killer Mike just released his recently BNM'd LP in R.A.P. Music. Make sure and catch him on said tour with El-Producto -- a list of all dates is below. While you're down there, make sure and stream a new track from Killer Mike and watch him talk about weed with his mother. No shit.

Killer Mike Calls His Mom About Weed - Call Your Mom