Killer Mike in Austin in 2012 (more by Tim Griffin) 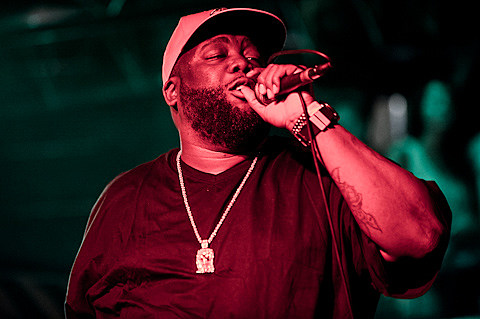 Atlanta rapper Killer Mike spent a great deal of 2012 on the road in support of that year's excellent R.A.P. Music album, and though he doesn't have a 2013 tour scheduled at the moment, he does have a bunch of festival appearances coming up. He'll head to Texas this March for 35 Denton followed by SXSW, and will also be at Sasquatch!, Bonnaroo, Primavera Sound, the Black Hippy-headlined Paid Dues Festival in San Bernardino, the just-announced ten-day Ottawa Bluesfest (he plays on 7/10 with Weezer, Passion Pit, Animal Collective, El-P and others), and he will be near NYC in July for Camp Bisco. Bisco tickets are still available.

However, if you want to see him actually in NYC and much sooner than that, you can enter Scion A/V's Twitter/Instagram contest (instructions and details HERE) to get into the Killer Mike show Scion is presenting on March 20 at Public Assembly with Two-9 and Morri$, as part of the same series that A$AP Rocky just played. Entering Scion's contest is the only way to gain access to the show.

All Killer Mike dates are listed, along with the Public Assembly show flyer, below...