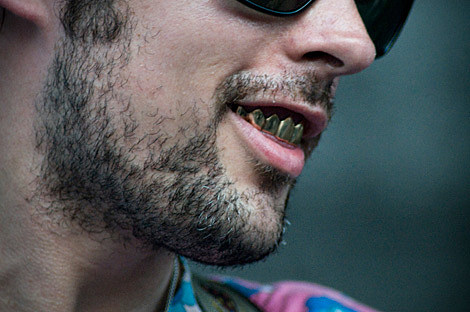 Deborah Kee Higgins (ATP organizer) to the Village Voice: We have a "No Assholes" policy. You can play once because we don't know you're an asshole, but you can't play twice.

Barry Hogan (ATP organizer): Killing Joke and the Butthole Surfers will never play ATP again, and they can both suck my balls. And you can put that in print. The Black Lips will never play again--they're assholes. They broke into a chalet and started stealing stuff.

ATP NY runs Sept 10-13 in Monticello, NY. Killing Joke are the subject of a new documentary. Butthole Surfers, who are going on tour soon, will probably never play a Bowery Presents venue ever again either. Then again, the first time I ever saw the Black Lips, they peed on the Mercury Lounge stage, and they've definitely returned to Bowery venues more than a few times (though their next NYC show happens to be for Live Nation).

This Saturday, the Black Lips play the FYF Fest in LA. At this summer's Leeds Festival they incited a stage invasion. Video below...

Black Lips incite a stage invasion at Leeds Festival 2009 during their last song 'Juvenile'. Watch out for Cole at the end... the security guard chased him around the festival for 20 minutes afterwards!