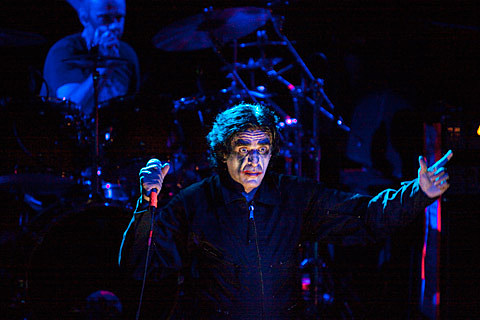 It's been a beyond bizarre few days for Killing Joke. The UK band, scheduled to make appearances with The Cult and The Mission in September, recently removed the following Facebook post that reportedly was posted by frontman Jaz Coleman:

Dear Gatherers,
It gives me great pleasure to announce the cancellation of the upcoming gigs with The Cult and The Mission.

Frankly, playing at a gig with The Cult never appealed to me in the first place. The only reason we allowed ourselves to be talked into it was to blow both bands off the stage and to steal their respective audiences.

As the concert has been downgraded to a venue that we have recently headlined (and sold out) it doesn't make sense. In addition to this Gatherers would only get to listen to a one hour set.

Then there would be a problem with the dressing room and witnessing The Cult charge the fans $200 per head for a Meet & Greet.

Lastly, all their songs suck! They clearly have no integrity (they refer to their hometown as L.A.)...

On a more positive note KJ will be recording in Argentina just after Christmas and Brixton Academy is booked for Spring.

I do believe the band will play a private gig at Metropolis Studios (London) which is of course open to all Gatherers (you are the first to know!).

I hope you are all as relieved as I am!

PS I don't want your money
PPS Life without KJ is unthinkable!"

None of the above was discussed with the other members of Killing Joke, and the statement's alleged creator has since gone missing. KJ offered the following statement in follow-up Facebook post:

A statement was posted on Facebook, reputedly by our singer, maligning both The Cult and The Mission and pulling us out of the shows.

He is now AWOL and has not contacted any of his band mates.

We are deeply embarrassed by this and offer our sincere apologies to all involved.

We are all concerned about our missing singer's welfare.

Killing Joke made a collective decision to play with The Cult and The Mission in September.

It was agreed by all of the band that we would do these shows. Indeed, we thought that they were something to look forward to, even though they were downsized.

We would still like to honour our commitment to this tour, the other bands, and all the Gatherers and people who have already bought tickets and made travel arrangements.

If this proves not possible, Killing Joke will make alternative arrangements to compensate for the trouble caused.

Meanwhile we are doing everything we can to make this tour happen and locate our missing singer.

Best wishes to Killing Joke and the safe return of frontman Jaz Coleman.