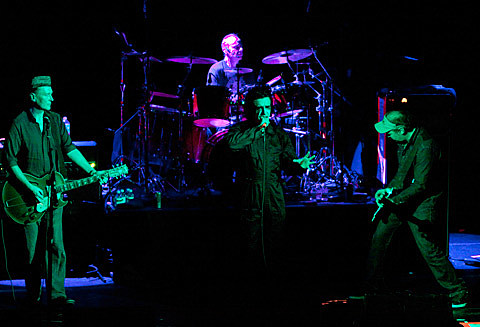 The Death and Resurrection Show is a feature length music documentary charting the turbulent, dramatic and often unbelievable journey of the British post-punk industrial legends Killing Joke. The film brings together three decades of archive footage with two decades of never before seen new documentary footage and unprecedented access to the members of Killing Joke, their management, music producers, industry figures and associates.

The film explores the progression of the band and their music; the in-fights, splits, reformations, legal tussles and side projects into classical and trance music, but it also delves deep into the other side of Killing Joke and it's core members. Brought together by a ritual ceremony performed in London, the 30 year experience that followed saw them constantly experimenting with the ritual, esoteric and mystical in their lives and their music.

So far no release date for the doc that explores the world of these post-punk legends, though the filmmakers are still "aiming for" a 2012 release. Check out the trailer and a clip below.

Killing Joke does, however, have a U.S. release date for MMXII, the band's new LP which hits shelves on Tuesday (10/30) via Spinefarm. You can stream "In Cythera" below.

So far no gigs are set for KJ, but word is that the band may hit US shores in 2013. Until then, stream the new track and check out videos from the upcoming documentary below.