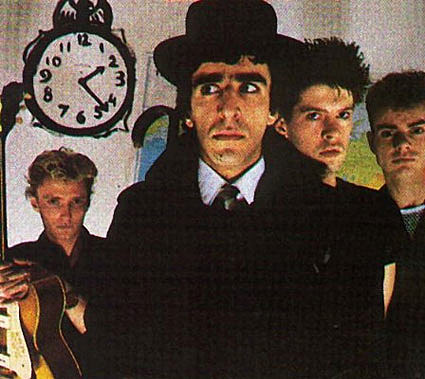 Finally, after numerous line-up changes through the years, all original Killing Joke members reunite for new album and world tour.

Drummer, Paul Ferguson, rejoins the line up for the first time since 1987 enabling a whole new generation of fans to see Killing Joke's legendary original formation. Diehard fans have been waiting for this moment for two decades!

Bassist, Martin 'Youth' Glover also steps back into the live arena after a near 15 hiatus, having not played live with Killing Joke since 1994's Pandemonium tour.

The tour will see Killing Joke take up a two night residency in most venues offering a different set on each evening. On the first night, they will play their first two albums in their entirety, 1980's self-titled album followed by the album 'What's This...For!'. Their
second performance in each city will treat fans to 1994's Pandemonium and the Island Records singles of'79 to '80.

Once described by Ferguson as 'the sound of the earth vomiting', Killing Joke is anthemic and grandiose in it's evocation of nightmare visions. Taking a sarcastic jab at authority and perceived reality to a sonically charged mixture of post punk and metal,
Killing Joke's heavy guitars and pounding tribal drums conjure a primitive atmosphere of doom, gloom and resistance.

Notorious for their use of inflammatory imagery, a backlash against a world they perceived as ever more materialistic, unjust and conservative, Killing Joke, railed against the establishment and created a unique sound from their very conception.

Ironically, in the current musical climate with it's obsession with rehashing eighties sounds, the 80's saw Killing Joke really pushing music forward, incorporating danceable elements with aggressive, grinding guitars and thumping drums. With elements of
proto-techno rock, their post apocalyptic vision has inspired bands as diverse and influential as Nirvana, Ministry, Nine Inch Nails, Foo Fighters, Soundgarden
and Godflesh. Killing Joke have always been and continue to be more than just a band.

"At last a ray of sunlight to illuminate these dark days. It is indeed my deepest pleasure to announce the dates of the 29th anniversary of the gathering. As usual we are never content sitting on the laurels of past Glories, a new Killing Joke recording is scheduled this summer!. Both Geordie and myself are thrilled as we hope you are with the line up, such anticipation comes as no surprise considering we have not played together since the Brighton Top Rank in 1982. We always knew this day would come after all it was inevitable. We hope all gatherers will join us in warmly welcoming back to active service our brothers Big Paul and Youth. The mysterious chemistry of the original line up is back, let their be gladness in your hearts."

KILLING JOKE BACK CATALOGUE TO BE RELEASED ON VINYL IN 2008
Killing Joke's back catalogue is going to be released on limited edition double gatefold 180g virgin DMM vinyl early next year through Let Them Eat Vinyl. For more information and to pre-order them check out this location.