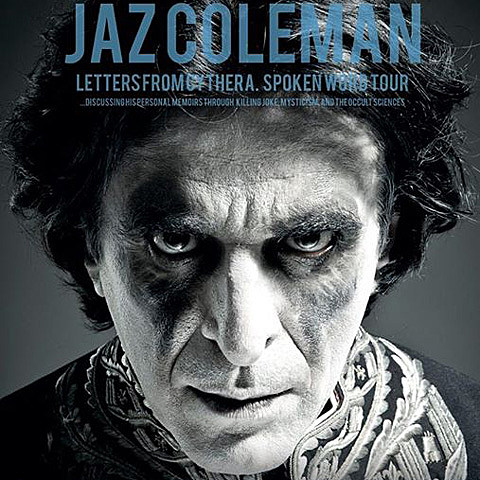 In 2014, Killing Joke frontman Jaz Coleman released a self-published book titled Letters from Cythera, as well as an accompanying CD, The Island, which is an orchestral score he composed, performed by the Auckland Symphony Orchestra. (Stream The Island below.) Cythera, by the way, is what Coleman calls New Zealand. Here's the description of the book:

Letters From Cythera was written between years 2007 - 2008 in the South Pacific and outlines how the occult sciences have shaped JAZ COLEMAN's philosophical outlook expounding on his preferred system for a personalized renaissance (the supersynthesis), which consists of completing 13 separate projects or masterpieces over a five to six year period. In the following book, JAZ documents his endeavors in tackling this epic undertaking. In short, it is the antithesis of a conventional rock biography.

Thus Letters from Cythera is the first of two books giving a detailed account of his hidden history and involvement with Hermetics, Earth Sciences and the Rosicrucian tradition noting the various Kabalistic innovations that have evolved over the last 33 years (and perhaps more significantly how they have influenced his work with both Killing Joke and Orchestra). Letters from Cythera also covers the principles of self-education, symbolism, quantum mechanics, numerology and of course his ongoing obsession with the image of a hidden island at the ends of the earth.

Jaz is mounting on a spoken word tour in support which hits NYC on July 21 at Saint Vitus where he'll be "discussing his personal memoirs through KILLING JOKE, mysticism, and the occult sciences." There will also be an audience Q&A, and tickets are on sale now.

One of Jaz's other continuing projects is his Orchestrated series where he takes the songs of a popular rock band and adapts them into classical arrangements. The series, which includes The Doors, Led Zepplin and Pink Floyd, will soon include a fourth, dedicated to a band that he's had an interesting relationship with: Nirvana. The grunge icons and Killing Joke had legal wrangles over "Come as You Are"'s resemblance to KJ's song "80s." Then Dave Grohl ended up playing drums with Killing Joke on their 2003 self-tiled album. The record is to be titled Orchestrated Nirvana: A Requiem to Kurt Cobain.. It was announced a year ago and no release date has been set, but you can follow the project's Facebook for updates.

Jaz Coleman tour dates are listed, with The Island stream and a video about Letters From Cythera, below..