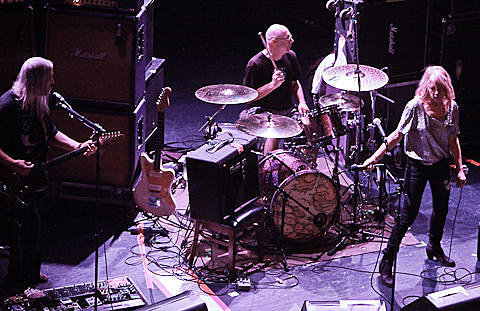 As mentioned a few times, there's a benefit honoring Kim Gordon happening at Issue Project Room on November 13 and 14, and the full lineup has finally been announced. It looks like this...

On the first night (11/13), there will be a VIP reception at 7 PM which will feature Kim performing as a duo with drummer Tim Barnes (who has played with Jim O'Rourke, Silver Jews, etc), along with food and drinks by Rucola. Then at 9 PM, J Mascis of Dinosaur Jr will play a solo set, followed by Body/Head (aka Kim Gordon and Bill Nace) performing as a trio with no wave legend Ikue Mori. Tickets are available for the VIP reception and 9 PM concert ($250, but $150 tax-deductible), and also just for the 9 PM concert ($35).

Then, on night 2 (11/14), Kim will first perform as a duo with her Her Noise collaborator Jutta Koether, and will then do a trio set with I.U.D. (aka Lizzi Bougatsos of Gang Gang Dance and Sadie Laska of Growing). Tickets for night 2 are available.

The week after the Kim Gordon benefit, there's also the Body/Head show at MoMA (11/21), featuring a DJ set from Kathleen Hanna (The Julie Ruin, Le Tigre, Bikini Kill). Tickets for that show are still available, and you can also win a pair.

Speaking of Gang Gang Dance side projects, Brian DeGraw's new solo project bEEdEEgEE will make its live debut on November 30 at Glasslands. Since we last spoke, Mas Ysa was added to that show. Tickets are still available.

We also just posted some tributes/sentiments from Kim Gordon and other Sonic Youth members to Lou Reed.

Tonight (10/29) in NYC is also Lee Ranaldo's guitar clinic at Other Music, which starts at 8 PM.

Updated Body/Head dates are listed, along with a video of Kim Gordon playing "Don't" with Dinosaur Jr at Terminal 5 in 2012, below...