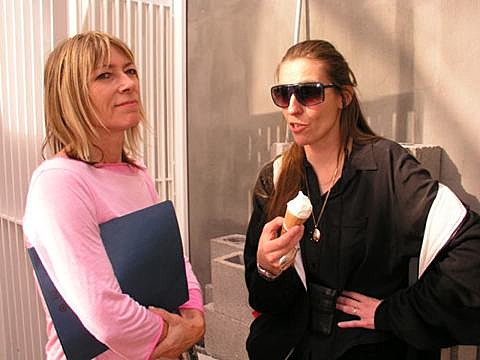 MoMA PS1 is currently featuring a retrospective on visual artist Mike Kelley, whose work -- often using cloth toys and dolls -- has been highly influential. Indie rock fans might recognize his orange knit doll on the cover of Sonic Youth's 1992 album, Dirty. This is the largest exhibition ever of Kelly who died last year at age 57. It's up through February 2.

As part of the retrospective, MoMA PS1 is holding Mike Kelley Sunday Sessions, including that Chris & Cosey show where they're performing a "live remix" of post-Throbbing Gristle project X-TG on January 5. While advance tickets are sold out, we are now told if you want to go there will be a few tickets available at the box office on day of show. That show starts at 1 PM with the performance at 4 PM.

There is another Sunday Session for the closing day of the retrospective (2/2) featuring a collaboration between Kim Gordon and visual artist Jutta Koether. The two (pictured above) have worked together several times before (like the recent IPR benefit) and will create a unique event for the occasion. The event starts at 4 PM and tickets are on sale now. Kim's band Body/Head also play Mass MoCA on Saturday (12/14) in North Adams, MA (their only upcoming date).

This Sunday (12/15) there is a non-musical Sunday Session called "Mike Kelly Moving Forward" that will present "new ideas about the influence of his work going forward. With lectures by Elisabeth Sussman (The Whitney Museum of American Art), Stacy Wolf (Princeton University), John C. Welchman (University of California, San Diego; chair Mike Kelley Foundation for the Arts). Artists Rachel Harrison, William Pope. L, and Joe Scanlan comprise a panel discussion." Tickets for that are on sale now.