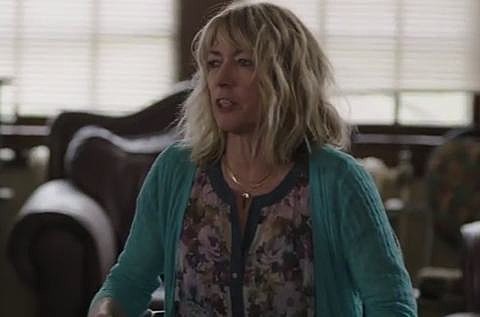 HBO series Girls was nominated for two Golden Globes but didn't win either on last night's awards ceremony. (The show lost to Brooklyn Nine Nine and Lena Dunham lost to Amy Poehler [who also co hosted the GGs].) At the same time elsewhere on the television dial, Girls made its Season 3 premiere with two back-to-back episodes. We knew this was coming but didn't know when -- the first episode featured Sonic Youth / Body/Head's Kim Gordon as Mindy, a member of Jessa's (Jemima Kirke) support group at rehab. The two don't get along. This is actually the third show with "Girl" in the title Gordon has acted in (the others being Gossip and Gilmore) but this is by far the meatiest part she's played. HBO has the whole premiere episode up on its YouTube channel to watch for free.

Meanwhile, a second soundtrack from the, titled Girls Volume 2: All Adventurous Women Do, will be released February 11 and features music by Vampire Weekend, Lily Allen, Beck, Cat Power, Jake Bugg, Aimee Mann and more. One of the tracks exlusive to the soundtrack is Jenny Lewis' "Completely Not Me" which features in the second episode's closing credits, is apparently a collaboration with Vampire Weekend's Rostam Batmanglij. You can listen to that over at Entertainment Weekly. Tracklist for the soundtrack is below.

In related news, while not the song from the Girls soundtrack, Lily Allen has released a new track, "Air Balloon," from her forthcoming new album and that can be streamed below.