DOWNLOAD: KIM - By The Time They Reach You (The Bagraiders Would Have Stolen Your Wallet And Changed All Your Money To Euros And Gone Shopping In Paris Remix) (MP3)
DOWNLOAD: The Presets ~ My People (MP3) 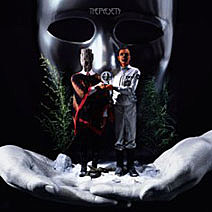 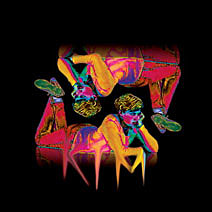 K.I.M. (Or Kimberley Isaac Moyes as his mother calls him) is erstwhile producer/drummer/programmer and one half of THE PRESETS, Australia's foremost proponents of dashing pop/dance (non) sense and (not so) sensibility.

KIM and The Presets have new singles out on Modular. "My People" may be one of the first big dancefloor songs of '08. We already hear it getting dropped regulary in DJ sets across the country. Download it above. Listen....

The entire Presets album "APOCALYPSO" is out May 13th on Modular. K.I.M.'s "Fistrogram" single was digitally releaed on January 29th, and Modular was nice enough to give us two copies of a limited edition 'Fistogram (D.I.M remix)' 12" to give away.

We've also got two pairs of tickets to the Modular Monthly happening this Saturday night (Feb 9) at Studio B in Brooklyn. Joakim is playing with "His Ectoplasmic Band", and Juan Maclean is DJing. To win, e-mail BVCONTESTS@HOTMAIL.COM (subject: KIM record OR Modular tickets). Include your first and last name in the email. Two winners will be picked today randomly, and contacted.

The Presets are visiting North America in May and June. They'll play Music Hall of Williamsburg in Brooklyn on June 4th, and Bowery Ballroom in Manhattan one day later. Tickets for both shows go on sale Wednesday. All tour dates, the "My People" video, and the Modular Monthly flyer, below...

The Presets - My People

This post was made possible with the help of Finger on the Pulse who are DJing themselves tonight (Feb 8) at Royal Oak in Williamsburg, and here's the flyer for what's going on Saturday in Williamsburg.... 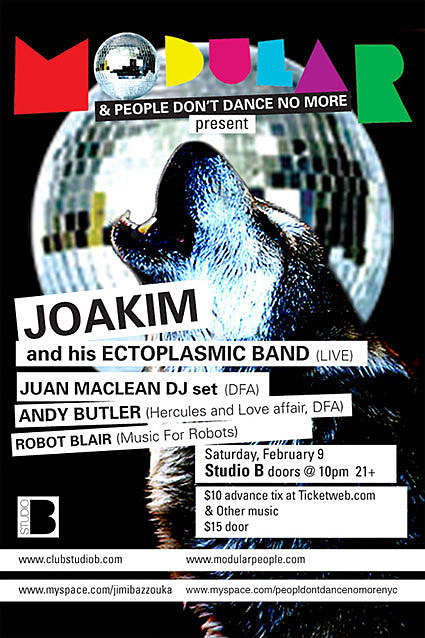